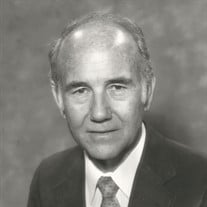 Abe Troy Hendricks, of Lindale, Texas, was born October 3, 1930, and died Wednesday, September 30, 2020. Troy was the 6th of 8 children born to Baxter Abraham Hendricks and Callie Ainsworth Hendricks of the Spotsville community, Columbia County, Arkansas. Troy is survived by his wife of almost 68 years, Francoise Sedberry Hendricks. He is also survived by one sister, Nancy Hendricks Ward of Oklahoma City, Oklahoma and one brother, Gail Hendricks (and wife Louise) of Macedonia, Arkansas. He is survived by numerous nieces and nephews and one brother-in-law, Lyle Sedberry of Kilgore, TX, and a sister-in-law, Ann Ainsworth of Magnolia, Arkansas. Troy is preceded in death by both parents, Baxter and Callie Hendricks, and by siblings, E. P. Hendricks of El Dorado, AR, Thad Hendricks of Spotsville, Tilman Baxter Hendricks (US Army Air Corp, WW 11), Maudine Hendricks Bullock of Magnolia, and Maurine Hendricks of Magnolia. Troy graduated from Village High School and then served 4 years in the US Air Force. He received a BS Degree in Mechanical Engineering in 1958 from Louisiana Tech. While at Tech, he was a member of Tau Beta Pi, Pi Tau Sigma, and Phi Kappa Phi, all academic honorary societies. Troy felt honored to one of the many Engineers at NASA who worked on the Apollo 11 Mission that put men on the moon in 1969. He retired from Amoco Oil Co., now BP, in Texas City in 1989. He and Francoise moved to Lindale, TX in 1997. A viewing and graveside service will be held on Saturday, October 3, 2020 at 1:00 p.m. at the Bethlehem Cemetery in Spotsville, AR with Military Honors under the direction of Lewis Funeral Home Inc. in Magnolia, AR. Officiating will be Bro. Danny Bullock and Bro. Paul Bullock. Visitation will follow the service at the Bethlehem Baptist Church. Masks are required. The family requests memorial donations be made to the Bethlehem Baptist Church or Bethlehem Cemetery, 71 Columbia Rd 261 East, Magnolia, AR 71753. To sign the online guest book or to share a memory visit www.lewisfuneralhome.biz

The family of Abe Troy Hendricks created this Life Tributes page to make it easy to share your memories.

Send flowers to the Hendricks family.