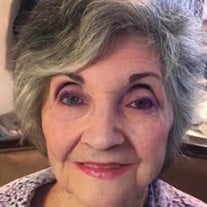 Barbara Eddy Wells, 82, transitioned to Heaven on December 29th after a several weeks of medical complications in NC. She was born on November 13th to the late Charlie Eddy and Nadean Allen in Ringgold, LA. Barbara married Tommy Wells in Little Rock, AR on July 7, 1956 and built a life together in Magnolia, AR for over fifty years before moving to NYS to be close to their great grandchildren and granddaughter; their love and devotion for one another continued until Tommy transitioned to Heaven on May 18, 2015. Together they had one son and one daughter, Kelly and Kimberly. At an early age, Barbara, accepted Christ as her Lord and Savior. As a teen, was baptized in the Church of Christ in Magnolia. She rededicated her life to her Lord in 1976 at Bethel Church in Magnolia, AR and continued to live for her Lord the remainder of her days. During her teen years, Barbara began sitting and caring for children and then dedicated her life to lovingly caring for children until the day she went home to her Lord. She was a devoted mother, grandmother, great grandmother and meme. She was preceded in death by her parents, Charlie Eddy, Nadean Allen and her stepmother, Lois Eddy; her husband of 59 years, Tommy; her son, Kelly; her baby twin great-grandsons, Alexander and Benjamin. Barbara is survived by her daughter, Kimberly Miceli of NC, her granddaughter, Dana Kaskov (Dmitiry), her four great grandchildren, Jordan David (15), Sophia Grace (13), Jonah Daniel (10), and Evelyn Faith (8) all of NYS; her goddaughter, Katy Jane Williams of AR, and her brother, Larry Eddy of TN; and numerous beloved nieces/nephews, cherished cousins and dear friends. There will be a private family graveside service to celebrate her home going at Magnolia Memorial Park in Magnolia, AR.

Barbara Eddy Wells, 82, transitioned to Heaven on December 29th after a several weeks of medical complications in NC. She was born on November 13th to the late Charlie Eddy and Nadean Allen in Ringgold, LA. Barbara married Tommy Wells in Little... View Obituary & Service Information

The family of Barbara Eddy Wells created this Life Tributes page to make it easy to share your memories.

Send flowers to the Wells family.