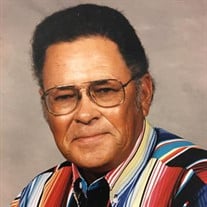 Billy Gerald Campbell, 80 of Magnolia, Arkansas passed away on Saturday, May 12, 2018 at his home. He was born on November 18, 1937 in Magnolia to the late Chester Campbell and Cleo Faye (Adkins) Hollensworth. He graduated from Magnolia High School where he played football. Billy proudly served his country for 10 years in the Army National Guard. He spent every weekend fishing and hunting which he loved. He started as a cabinet maker and then became employed by Unit Structures (Koppers) where he worked for over 50 years building patterns for large cathedrals, churches and offices. He built the pattern for the arches in his church where he was a member at First United Pentecostal Church in Magnolia. He is preceded in death by his parents; grandparents Clarence and Annie Mae Akins; and a sister Peggy Ray Campbell Flow. Billy is survived by his wife of 60 years who he married on September 14, 1957, Gloria (Hare) Campbell; daughter Tracy Terwilliger Bentz and husband Terry of Hot Springs, Arkansas; son Billy Campbell Jr. and wife Patricia of Magnolia; grandson, Shaun Dodson and wife Lacey of Taylor, Arkansas; great granddaughter Paycen Dodson of Taylor; two sisters, Ann Swilley and husband Daniel and Jane Gray all of Ferriday, Louisiana; and a host of nieces, nephews, and friends. Funeral services will be held at 2:00 pm on Tuesday, May 15, 2018 at the First United Pentecostal Church with Pastor Jason Wiley and Pastor Dwayne Dycus officiating. Burial will follow at Sharman Cemetery under the direction of Lewis Funeral Home, Inc. Visitation with the family will be Monday evening from 6:00 to 8:00 PM at the funeral Home. Memorials may be made to the First United Pentecostal Church Building Fund, 1603 Hollensworth Street, Magnolia, Arkansas 71753. Pallbearers will be Dale Powell, Dennis Elledge, Harold Elledge, David Faulk, Kenneth Swilley, and Bo Swilley. To sign the online guestbook or share a memory visit www.lewisfuneralhome.biz

Billy Gerald Campbell, 80 of Magnolia, Arkansas passed away on Saturday, May 12, 2018 at his home. He was born on November 18, 1937 in Magnolia to the late Chester Campbell and Cleo Faye (Adkins) Hollensworth. He graduated from... View Obituary & Service Information

The family of Billy Gerald Campbell created this Life Tributes page to make it easy to share your memories.

Billy Gerald Campbell, 80 of Magnolia, Arkansas passed away on...

Send flowers to the Campbell family.