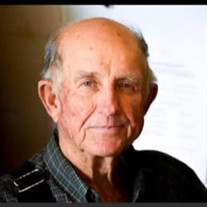 Billy Hugh Emerson, 89 of Taylor, Arkansas passed away on Sunday, December 13, 2020 at Christus St. Michael Health System in Texarkana, Texas. He was born on August 4, 1931 in the Sharman Community in Columbia County, Arkansas to the late William Lewis “Willie” Emerson and Ima Lee (Willis) Emerson. He was a member of the Unity United Methodist Church and retired from International Paper Company where he was the wood yard supervisor. Billy was a true family man, loving life, his brothers and sisters, his children, grandchildren, and many friends. He spent many hours taking the grandchildren for rides on the 4-wheeler. He always tried to teach them life lessons that would help them for later in life. His favorite place to be was outdoors, hunting, fishing, camping, farming, raising cows, driving the tractor and bailing hay. He never failed to have a wonderful garden full of good things to eat. He spent his whole life working to provide and support his family, but the greatest thing he gave them was his unconditional love. Billy is preceded in death by his parents; a son Barry Emerson; two brothers, Harold Emerson and Don Emerson; and a sister Dollie Fussell. He is survived by his wife of 68 years Ruth Emerson of Taylor; two children, Scott Emerson and wife Pam of Taylor, Gay Lewis and husband Rickey of Gladewater, Texas; sister Imogene Sweet of Taylor; brother Bobby Emerson and wife Karen of Taylor; eight grandchildren, fourteen great grandchildren, and one great great grandson; and a host of extended family and friends. A graveside service will be held at 10:30 am on Thursday, December 17, 2020 at Sharman Cemetery with Rev. Carol Moore officiating under the direction of Lewis Funeral Home, Inc. in Magnolia. A guest book and viewing will be available on Wednesday, December 16, 2020 at the funeral home until 5:00 PM. Memorials may be made to the Sharman Cemetery Fund. C/O 5270 Columbia Road 1, Taylor, Arkansas 71861. Pallbearers will be Bart Emerson, Beau Emerson, Shaun Dodson, Roger Sweet, Dayton Grundy, and David Brazzel. To sign the online guestbook or share a memory visit www.lewisfuneralhome.biz

Billy Hugh Emerson, 89 of Taylor, Arkansas passed away on Sunday, December 13, 2020 at Christus St. Michael Health System in Texarkana, Texas. He was born on August 4, 1931 in the Sharman Community in Columbia County, Arkansas to the late... View Obituary & Service Information

The family of Billy Hugh Emerson created this Life Tributes page to make it easy to share your memories.

Billy Hugh Emerson, 89 of Taylor, Arkansas passed away on Sunday,...

Send flowers to the Emerson family.