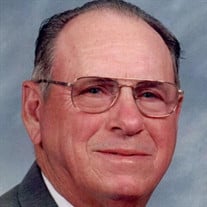 Billy Robert Rogers, 87, of Magnolia, Arkansas went to be with his Lord and Savior Thursday, December 30, 2021 at Wentworth Place. Billy was born on June 24, 1934 in Magnolia, Arkansas. He retired as supervisor from Southern Extrusion. He was a member and enjoyed “pickin” on his guitar for the blue grass band, The Shine On’s. He also was an avid fan and enjoyed listening to the Arkansas Razorback games on the radio. Billy was a member of the Lydesdale United Methodist Church, was a devout Christian who loved the Lord and was a devoted family man who loved his wife, children, grandchildren, and great grandchildren. Billy is survived by his son Randy Rogers and wife Kim of Sherwood, daughters Judy Wells and husband Bubba of Buckner and Sherrie Carter and husband Robert of Stephens, grandchildren Bill Wells and wife Christina and Jill Rader and husband Chad of Buckner, Brandy Faught and husband Steve of Little Rock, Chelsea Slack and husband Devin of New Orleans, Louisiana, Ashlie Tobey of Hot Springs, Jason Rogers of Little Rock, and Tyler Rogers and wife Rachel of Fayetteville, great grandchildren Abbie Wells of Magnolia, Karah Rogers of Little Rock, Julian, Edison, and Jet Tobey of Texarkana, Texas, Hadlee Rogers of Little Rock, Julia Rader, Wade Wells, and Emi Wells of Buckner, Magnolia Rogers and Xavier Creed of Fayetteville, brother in law Jimmy Wilson and wife Gaynell of Magnolia, and special caregivers Kerri Goshen, Mary Ann Green, and Jackie Todd. Visitation will be Sunday, January 2, 2022 at 1:30 p.m. at the Magnolia City Cemetery with a graveside to follow at 2:00 p.m. with Rev. Dan Read officiating under the direction of Lewis Funeral Home, Inc. in Magnolia. In lieu of flowers, memorial donations may be made to Magnolia City Cemetery Fund, Magnolia City Hall, PO Box 1126, Magnolia, AR 71754. To sign the online guest book or to share a memory visit www.lewisfuneralhome.biz

Billy Robert Rogers, 87, of Magnolia, Arkansas went to be with his Lord and Savior Thursday, December 30, 2021 at Wentworth Place. Billy was born on June 24, 1934 in Magnolia, Arkansas. He retired as supervisor from Southern Extrusion.... View Obituary & Service Information

The family of Billy Robert Rogers created this Life Tributes page to make it easy to share your memories.

Billy Robert Rogers, 87, of Magnolia, Arkansas went to be with...

Send flowers to the Rogers family.