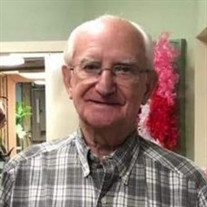 Carl Lee Bailey, 83 of McNeil, Arkansas passed away on Tuesday, December 8, 2020 at the John R. Williamson Hospice House in El Dorado, Arkansas. He was born on February 21, 1937 in McNeil, Arkansas to the late Grady Lee Bailey and Lorene (Crumpler) Sanders. Carl lived in Shreveport, Louisiana while working for SWEPCO and returned to Arkansas where he was a floral designer throughout the Ark La Tx owning and operating his own shops. One of the many was The Green House Florist and after his retirement he continued to work at Magnolia Blossom Shop. He served his community as an alderman for the City of McNeil for ten years, was an avid bowler, bird lover, and volunteered his time for the Festival on the Rails in McNeil, the Miss Magnolia Pageant and Miss Arkansas Pageants for many years. Carl is preceded in death by his parents; his wife Sharon Anne Bailey; and a brother Hoyt Bailey. Carl is survived by his children, Eric Bailey of McNeil, Heather Bailey of McNeil, and Lanny Bailey of Camden; five siblings, Emma Jean Jackson, Robert and Connie Sanders, Teri and Londy Porter, Cheri Hammonds; and Leslie Disotell; grandchildren, Shelby and Ray Chaisson, Erica Bailey and Michael Jenkins, Dustin Bailey, Morgan and Wayne Highsmith, Montana and Ryan Ware, Lucas Dowling and Bree Wise, Lance Dowling, and Chase Wade; twenty two great grandchildren; and a host of extended family and friends. Visitation with the family will begin at 1:30 PM on Tuesday, December 15, 2020 at New Hope Cemetery with a graveside service to follow at 2:00 PM with Bro. Lonnie Warren officiating under the direction of Lewis Funeral Home, Inc. in Magnolia. Carl’s grandsons will serve as pallbearers. To sign the online guestbook or share a memory visit www.lewisfuneralhome.biz

Carl Lee Bailey, 83 of McNeil, Arkansas passed away on Tuesday, December 8, 2020 at the John R. Williamson Hospice House in El Dorado, Arkansas. He was born on February 21, 1937 in McNeil, Arkansas to the late Grady Lee Bailey and... View Obituary & Service Information

The family of Carl Lee Bailey created this Life Tributes page to make it easy to share your memories.

Carl Lee Bailey, 83 of McNeil, Arkansas passed away on Tuesday,...

Send flowers to the Bailey family.