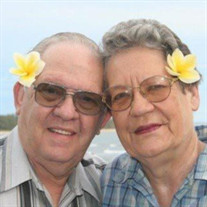 Carlyn Virginia (Peace) Hall of Mt. Ida, Arkansas, was called to her Heavenly Home on October 29, 2021, at the age of 83. She was born January 22, 1938, to Carl Alonzo Peace and Lizzie Christine (Williams) Peace in Atlanta, Arkansas. Anyone that knew Carlyn would probably tell you she was the hardest working person they had ever met. From holding elected office, running the family business, serving as the longtime director of vacation bible school and pianist of Landmark Baptist Church, Carlyn loved to serve her friends, church, and community. Of all her accomplishments, Carlyn was proudest of her family, including her two sons, her five grandchildren, her great grandson, and the love of her life for 65 years, James Hall. Having previously resided in Stephens, Little Rock, England, and Pine Bluff, she was a staple in Mt. Ida and could be found behind the desk at Able Parts, her family business. She was an overcomer who defeated Non Hodgkin’s Lymphoma in 2000, making a full recovery at age 62. She was an avid fisherman and could outfish anyone who took up the challenge. She is preceded in death by her husband: James Hall, one son: Clennon Hall, her parents: Carl and Lizzie (Williams) Peace, brother: Lewis Peace, and a host of beloved family and friends that have welcomed her home. Carlyn is survived by her youngest son, William Hall (Karen) of Greenbrier, grandchildren: Christi Hall Hensley (Josh) of Conway, Katie Hall Garner (Jerry) of Little Rock, Ginnie McGee (Stewart) of Greenbrier, Brandon Hall, and Chad Hall, one great-grandson, Clint Hall, Brothers, Len Peace (Karen) and Ben Peace (Barbara), and many other family members and close friends. Services will be held Tuesday, November 2, 2021, at Lewis Funeral Home, Inc. in Magnolia, Arkansas. Visitation will begin at 1:00pm with a memorial service to follow at 2:00pm. The graveside service will be held at Stephens Cemetery in Stephens, Arkansas. In lieu of flowers, our family asks that donations be made to Landmark Missionary Baptist Church, P.O. Box 426, Mt. Ida, Arkansas 71957.

Carlyn Virginia (Peace) Hall of Mt. Ida, Arkansas, was called to her Heavenly Home on October 29, 2021, at the age of 83. She was born January 22, 1938, to Carl Alonzo Peace and Lizzie Christine (Williams) Peace in Atlanta, Arkansas. Anyone... View Obituary & Service Information

The family of Carlyn Virginia (Peace) Hall created this Life Tributes page to make it easy to share your memories.

Send flowers to the Hall family.