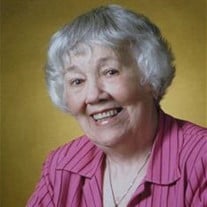 Charleane Marie Reeves died peacefully in her sleep on April 15, 2018 in Bismarck, North Dakota. She lived 88 wonderful years. Charleane is survived by her brother, Robert Wayne Armer and his wife Janet Armer of Gassville, Arkansas; daughter, Diana Roberson of Russellville, Arkansas; son, Lewis Dendy, Jr. of Bismarck, North Dakota; grandsons James Roberson III of Russellville and Charles and Khalin Dendy of Bismarck; and seven great-grandchildren, step-daughter Paula A. Reeves Morton and her husband Don Morton, step-daughter Patricia Reeves Stroope and her husband Joe Stroope, and step-grandsons Jack Sterns, Jerry Sterns, and Tom Davis. Charleane was preceded in death by her husband, James Harold Reeves; her parents, Robert L. and Mary E. Goley Armer; and two great-grandchildren, Wyatt and Eli Dendy. Born and raised in southwest Arkansas, during her life Charleane also lived for years in both Texas and California, where she and her husband James Harold managed various apartment complexes and the Dorcheat Water Association. In her later years, she moved to Bismarck, where she enjoyed time with her many family members who live there. She loved horses and community service and was a member of the Columbia County Sheriff Mounted Patrol in southwest Arkansas. Her varied interests ranged from being a Cub Scout Den Mother to riding dirt bikes in the California desert. She served as president of the Magnolia, Arkansas chapter of the Kiwanis Club, and she was the first woman vice president of the Arkansas state chapter. Charleane was active in Methodist churches where ever she lived, including the Asbury United Methodist Church, and she would travel hundreds of miles to participate in gospel singings. Life was always an adventure for her and she never let up on the throttle. Charleane was extremely appreciative of the professional, loving care she received from the staff and her friends at the Augusta Prospera Good Samaritan Society Assisted Living Facility and Sanford Bismarck medical facilities during her later years. Her family is so thankful for her love and the many years of good life she shared with them. They will miss her dearly. On Thursday, April 19th, visitation will be at 1:00 p.m. and funeral services will immediately follow at 2:00 p.m., both in the chapel at the Lewis Funeral Home, Inc. in Magnolia, Arkansas. Burial will be at the Philadelphia Cemetery south of Magnolia following the funeral ceremony. To sign the online guest book or to share a memory visit www.lewisfuneralhome.biz

The family of Charleane Marie Reeves created this Life Tributes page to make it easy to share your memories.

Charleane Marie Reeves died peacefully in her sleep on April...

Send flowers to the Reeves family.