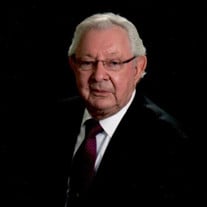 Charles Ray Shinn, 83, of Hot Springs, Arkansas, formerly of Magnolia, Arkansas, passed away Friday, April 29, 2022 at the University of Arkansas for Medical Sciences Center in Little Rock, Arkansas. Charles was born on September 23, 1938 in Magnolia. He was a graduate of Magnolia High School and attended Southern State College (SAU). He became an entrepreneur, starting with Shinn Wholesale candy distribution and then becoming a hotel developer and manager. Shinn Enterprises, Inc. has developed and managed several hotels throughout Arkansas over the past 30 years. He was a member of the Central Baptist Church and Civil Air Patrol. His hobbies were airplanes, racing go carts, (basically he enjoyed anything that had an engine), hunting, and spending time with family and friends. Charles loved the Lord and loved others. He was kind, humble, gentle, and had a very clever wit. His genuine interest in people resulted in many long-lasting friendships. Some that began as early as grade school and some that began in his recent years of living in Hot Springs. He was devoted to Alice, his wife of 61 years, his children and grandchildren. He is preceded in death by his parents, Raymond Shinn and Myrtle (Rogers) Shinn and two brothers, Bill Shinn and Don Shinn. Charles is survived by his wife Alice (Phillips) Shinn of Hot Springs, daughter, Pamela Shinn Spelman and husband Jeff of Richardson, Texas, son Gregory Ray Shinn and wife Dawn of Benton, Arkansas, grandchildren Joseph Carlton Spelman and wife Lauren of Richardson, Amanda Renee Spelman of Plano, Texas, Sheldon Ray Shinn, Madison Margaret Shinn, and Lindsey Mae Eshenbaugh of Benton, and a host of extended family and friends. The family would like to thank Dr. Konstantinos Arnaoutakis and his incredible team at UAMS for their compassionate care of our husband and father over the last three years. We thank Dr. Hunter Carrington and his team in Hot Springs as well. They have all been so caring and responsive to our needs which truly was a blessing to our family. Funeral services will be Wednesday, May 4, at 10:00 a.m. at Central Baptist Church with Dr. Mike Seabaugh officiating. Burial will follow at Magnolia Memorial Park Cemetery under the direction of Lewis Funeral Home, Inc. in Magnolia. Visitation will be Tuesday, May 3 from 5:00 to 7:00 p.m. at the funeral home. Active pallbearers will be Joseph Spelman, Sheldon Shinn, Chris Peterson, Derek Peterson, Doug Shinn, and Clay Wilson. Honorary pallbearers will be Tommy Fallin, Larry Price, Pat Downs, Rodney Peterson, Larry Terrell, and Doak Boreing. Memorial donations may be made to Central Baptist Church, 207 West Union, Magnolia, AR 71753 or to UAMS Winthrop P. Rockefeller Cancer Institute. To sign the online guest book or to share a memory visit www.lewisfuneralhome.biz

The family of Charles Ray Shinn created this Life Tributes page to make it easy to share your memories.

Send flowers to the Shinn family.