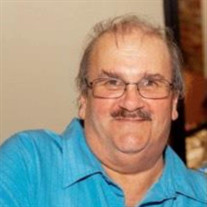 Chuck Jean, 59, of Magnolia, Arkansas passed away Tuesday, October 26, 2021 at the Magnolia Regional Medical Center in Magnolia. Chuck was born on November 27, 1961 in El Dorado, Arkansas. He was a member of the Macedonia Baptist Church. He enjoyed going to flea markets and loved taking his grandson to the car races. He was preceded in death by his parents Charles Henry Jean, Sr. and Ramona Jean (Waddle) Jean and one sister. Chuck is survived by his wife of 17 years Vicki Sanders Jean of Magnolia; daughters Grace Cornett and husband Russell and Susan Pennington of Magnolia; son Chris Wright and wife Kelly of Vilonia; grandchildren Lane Cornett, Jenny Cornett, Eleanor Pennington of Magnolia, and Tanner Wright and Georgia Wright of Vilonia; father and mother in law Newton and Jeanette Sanders of Magnolia; brothers in law Terry Sanders and wife Donna Schobey of Magnolia and Martin Sanders and wife Wendi of Magnolia; a host of nephews, nieces, and friends. Funeral services will be held on Saturday, October 30, 2021 at 10:00 a.m. at the Macedonia Baptist Church with Bro. Joe Owens, Bro. Ron Owen, and Bro. Donnell Ford officiating. Burial will follow at the Macedonia Cemetery under the direction of Lewis Funeral Home, inc. in Magnolia. Visitation will be Friday from 6:00 to 8:00 p.m. at the funeral home. Pallbearers will be Terry Sanders, Martin Sanders, John Sanders, Halen Sanders, Russell Cornett, and Lane Cornett. Honorary pallbearers will be the Men of Macedonia Baptist Church. Memorial donations may be made to the Macedonia Baptist Church, 760 Hwy 160, Magnolia, AR 71753. To sign the online guest book or to share a memory visit www.lewisfuneralhome.biz

Chuck Jean, 59, of Magnolia, Arkansas passed away Tuesday, October 26, 2021 at the Magnolia Regional Medical Center in Magnolia. Chuck was born on November 27, 1961 in El Dorado, Arkansas. He was a member of the Macedonia Baptist... View Obituary & Service Information

The family of Chuck Jean created this Life Tributes page to make it easy to share your memories.

Send flowers to the Jean family.