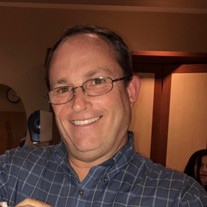 On April 24, 2020, Anthony Craig Brown, loving husband and father to five children, entered the gates of Heaven and is now in the presence of his Savior. He was 54 years old. Although cancer has caused a great loss and void in the hearts of his beloved family and friends, Craig has finally won the battle. He is free from pain, his body is healed, and he is in Heaven. His family is at peace in knowing that he was welcomed by his loved ones to his “forever home” where he can now rejoice and sing praises to the Father as an angel in His Kingdom. Craig was born on October 22, 1965 in Union City, Tennessee. He moved to Magnolia in 1973 and graduated from Magnolia High School in 1984. Craig worked from age of 14 as a jeweler at Milam’s Jewelry in Magnolia, AR. He then spent 20 years of his life managing a staffing company in Tennessee. Craig was preceded in death by his father, Carlton Lee Brown, father-in-law, Jim Wallace, and mother-in-law, Alverne Wallace. He is survived by his wife, Vicki Brown and their five children, Anthony Brown, Audrionna Brown, Alecia Brown (fiancé Conner Martin), Logan Thompson, and Caylin Thompson; his mother, Dianne Williams (Gerald); Step-mother, Patsy Brown; sister, Melinda Norman; brother, Lynn Brown (Rachel); sister-in-law, Tena Simpson (Keith); 3 stepbrothers, Shawn Rowe (Donna), Jason Rowe (Julie), and Tracy Rowe( Autumn); 4 grandchildren, Alyssa Brown, Addison Brown, Brinley Brown, and Alaynna Rikard; the mother of his children, Tammy Lambert; and lifelong friend, Randal Wilbanks. He also leaves behind many special friends who have loved and stood by him, fighting this battle with him every step of the way. His closest friends have prayed with and for him throughout this difficult journey with cancer. Craig made many lasting friendships over the years because of his fun and upbeat personality. He is remembered for being a man of his word and a true friend to so many. He was quick-witted and high-spirited yet selfless and attentive. He enjoyed being outside, working on projects, singing and listening to music, helping others, and making others laugh, and he just simply loved people. He never met a stranger and viewed each day as a blessing. Even though he faced many tough times throughout his life, Craig always found the positive in every situation. He had unceasing faith in God and never questioned or asked Him, “Why?” He felt blessed and was grateful for every day that God allowed him to spend with his family and friends. The family would like to extend their gratitude to two very special nurses, Laura McHugh from Tennessee and Crissy Kus from Kansas, for caring for Craig and maintaining constant communication with him throughout his journey. They supported him and were there for him day or night. His love and admiration for these two ladies was unwavering. The family also would like to thank Arkansas Hospice for the exceptional care that was provided to Craig during the last month of his life. A graveside celebration of life will be held at Antioch East Cemetery with family and close friends. At 2:00 pm on Tuesday, April 28, 2020 with Steve Smith from Germantown, Tennessee officiating under the direction of Lewis Funeral Home. A guestbook will be available on Monday April 27th from 1:00 PM to 5:00 PM. Per Craig’s request, he asked that any Memorial donations be made to the University of Kansas Health System, Cellular Fund Development, 2330 Shawnee Mission Parkway, Suite 305, Westwood, KS 66205 or www.kansashealthsystem.com/giving to give online Pallbearers will be Jeremy Armstrong, Paul Brewster, Mark Hickman, Stephen Rickard, Greg Shinn, and Randal Wilbanks. To sign the online guestbook or share a memory visit www.lewisfuneralhome.biz

On April 24, 2020, Anthony Craig Brown, loving husband and father to five children, entered the gates of Heaven and is now in the presence of his Savior. He was 54 years old. Although cancer has caused a great loss and void in the hearts... View Obituary & Service Information

The family of Craig Brown created this Life Tributes page to make it easy to share your memories.

Send flowers to the Brown family.