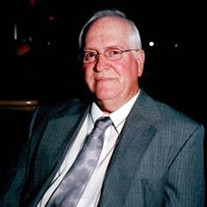 David Leon Carlton, 73, of Emerson, AR died Sunday, December 9, 2018 at the Community Compassion Center in Magnolia, AR. David was born June 25, 1945 in Dermott, AR to the late Leonard Marm Carlton and Juanita (Milholland) Carlton Bowles. He was also preceded in death by a son David Wayne Carlton; sister in law Christine Charles; brother in law Wayne Talley; father and mother in law Raymond and Ruth Talley. He was a member of the Mt. Paran Baptist Church. He served his country in the United States Navy during the Vietnam War on the USS Johnston. He enjoyed sharing his stories of being in the Navy with family and friends. He was a third generation floor contractor who grew up working beside his grandpa and daddy and he carried on the tradition with his two sons. He was a hardworking man and took pride in his work. He loved spending time with each of his children and grandchildren and has shared a lifetime of memories with them to treasure. He and Carolyn enjoyed many weekend adventures traveling together. Their love was once in a lifetime. David is survived by the love of his life for 27 years Carolyn of Emerson; children Juanita Evans and husband Romney of Emerson, Edward Carlton and wife Christina of Texarkana, TX, Billy Carlton and wife Brenda of Emerson, Jennifer Morgan of Monticello, Timothy Beavers and wife Ashley of Calhoun, LA; sister Mary Mills and husband Woody of Monticello; grandchildren Chad Evans and wife Lesley, Austin Evans, Edward Carlton, Jr., David Carlton, Seth Carlton and Connor Morgan; great grandchild Adeline Evans; brothers in law James Talley and John Charles; sisters in law Cathy McGee and Virginia Talley; a host of very special nephews and nieces. Funeral services will be Wednesday, December 12, 2018 at 10:00 a.m. at Lewis Chapel with his grandson Chad Evans and Bro. Jason Lupo officiating. Burial will follow with military honors at Western Cemetery under the direction of Lewis Funeral Home, Inc. in Magnolia. Visitation will be Tuesday from 5:00 to 7:00 p.m. at the funeral home. Pallbearers will be Edward Carlton, Billy Carlton, Timothy Beavers, Edward Carlton, Jr., Romney Evans, and Eric Talley. The family would like to thank the staff at Community Compassion Center of Magnolia for the loving care bestowed upon David and his family during this time. The family requests memorial contributions be made to the Western Cemetery Fund, c/o Robert D. Ray, 1493 Willow Road, Shongaloo, LA 71072 To sign the online guest book or to share a memory visit www.lewisfuneralhome.biz

The family of David Leon Carlton created this Life Tributes page to make it easy to share your memories.

Send flowers to the Carlton family.