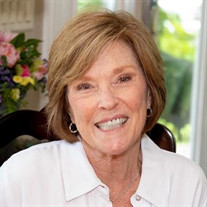 Deborah Colleen (Parrott) Grafton, 71, of Magnolia, AR passed away Thursday, October 15, 2020 at her home surrounded by her family. Debbie was born to James and Lucy Parrott in Chattanooga, TN, on May 14, 1949. She and her 2 sisters grew up in Rising Sun, Maryland, where she was the cute redhead on the high school cheer squad. While in college to be a nurse, she met and married Ed Grafton, a young man from Magnolia, Arkansas, who was stationed at the Naval Nuclear Power School in Bainbridge, Maryland. They had 2 daughters and later settled in Magnolia, Arkansas, where she worked as a dental assistant. Years later, she finished her nursing degree at Southern Arkansas University. Debbie Grafton took care of a lot of people throughout her life as a nurse. From caring for patients at Magnolia Hospital early in her career to later taking care of families with Life Touch Hospice, Debbie loved her job and loved caring for people even more. She made a difference for so many people during the hardest times of their lives, and she did it with kindness and compassion. Now, all that changed when she was watching her grandchildren play sports. Dressed in her favorite Panther baseball shirt, she would cheer on her favorite baseball player, Adam, as well as his teammates, and she would give the umpire a little trash talk if he’d earned it. She loved to cheer for Claudia on the CCS volleyball court or the softball field and for Carter on the CCS basketball court. Abby, her oldest grandchild, could always count on seeing her little Mimi at every game and recital. Debbie loved her family, and she loved every single thing those grandchildren did. She had a special bond with each one. Debbie was diagnosed with multiple myeloma in December and was undergoing treatments in Little Rock; the family is heartbroken she was taken so soon. Over the years Debbie’s daughters have been told many times that their mother was an angel, and today, she truly is an angel in heaven. Debbie is preceded in death by her father James Parrott. She is survived by her husband of 52 years Edwin Grafton and her two daughters Angela Pieratt (Joe) and Rebecca Ray (Andy) of Magnolia; grandchildren Abigail Pieratt, Adam Pieratt, Carter Ray, and Claudia Ray of Magnolia; mother Lucy Parrott of Crossville, TN; sisters Cyndy Carroll of Biloxi, MS, Zandra Shmel (Mike) of Crossville, TN; nephews Nicholas Shmel (Lisa) of Lake Tahoe, NV and Stephen Shmel of Wildomar, CA. Graveside services will be held on Sunday, October 18, 2020 at 2:00 p.m. at the Memorial Park Cemetery with Bro. Dustin Wisely officiating under the direction of Lewis Funeral Home, Inc. in Magnolia. Visitation will be Saturday, October 17 from 5:00 to 7:00 p.m. at the funeral home. In lieu of flowers, memorials can be made to the Panther Baseball Booster Club or the Columbia Christian School Athletic Fund. To sign the online guest book or to share a memory visit www.lewisfuneralhome.biz

Deborah Colleen (Parrott) Grafton, 71, of Magnolia, AR passed away Thursday, October 15, 2020 at her home surrounded by her family. Debbie was born to James and Lucy Parrott in Chattanooga, TN, on May 14, 1949. She and her 2 sisters... View Obituary & Service Information

The family of Deborah Colleen Parrott Grafton created this Life Tributes page to make it easy to share your memories.

Send flowers to the Grafton family.