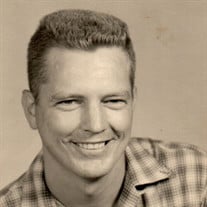 Derrell Atkins, 88, of Waldo, AR passed away Sunday, October 27, 2019 at the Community Compassion Center in Magnolia, AR. Derrell was born on June 7, 1931 in Rosston, AR to the late Dowis Clement and Gertie Hester (Edwards) Atkins. He served as a radio operator in the United States Army from 1952-54 during the Korean War. He served as a teacher, coach, and administrator with the public school systems in Tiller, AR and in Stamps, AR where he retired. He was a longtime and faithful member of the First United Methodist Church in Magnolia and was a member of the American Legion Post #3. He was an avid basketball player and was on the Waldo High School Basketball Team that won the 1949 State Championship. He was preceded in death by his parents and brothers D.C. Atkins and Donald Atkins. Derrell is survived by his wife Anna Meade (Sims) Atkins of Waldo; children Eddy Atkins (Janice) of Hot Springs, Todd Atkins (Gina) of Magnolia, Brett Atkins of Waldo, Kelley Atkins of Germantown, TN, Julie Linder of Waldo, and Jennie Atkins of Hurst, TX; brothers Gerald Atkins (Betty) of Hot Springs Village and Kenny Atkins of Little Rock; sister Syble Fincher of Ogden, UT; grandchildren Derrell Atkins and Bradley Atkins of Magnolia, Blake Atkins and Brady Atkins of Germantown, TN, Mallory Linder of Southhaven, MS, Betsy Mitchael (Jake) of Fayetteville, Cassidy Atkins of Boulder, CO, Roxanne Atkins of Magnolia, and Cheryl Walton (Jeremy) of Baton Rouge, LA; great grandchildren Shawn Cantrell and Adalyn Cantrell of Southhaven, MS and Elsie Mitchael of Fayetteville. Funeral services will be held on Thursday, October 31, 2019 at 2:00 p.m. at the Lewis Chapel with Bro. David Watkins officiating. Burial will follow at the Shiloh Cemetery under the direction of Lewis Funeral Home, Inc. in Magnolia. Visitation will be Wednesday from 6:00 to 8:00 p.m. at the funeral home. Pallbearers will be his sons and grandsons. The family requests memorial donations be made to the Shiloh Cemetery, 1650 Columbia Rd 41, Waldo, AR 71770. To sign the online guest book or to share a memory visit www.lewisfuneralhome.biz

The family of Derrell Atkins created this Life Tributes page to make it easy to share your memories.

Send flowers to the Atkins family.