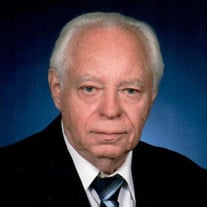 Don Golden Watson, 86, of New Braunfels, Texas, formerly of Brister, Arkansas, passed away Thursday, October 7, 2021 at the Elan Westpointe Assisted Living Center in New Braunfels. Don was born on June 27, 1935 in Magnolia, Arkansas to the late James Golden and Pearl (Caudle) Watson. He was a member of the Southern Oaks Baptist Church in Tyler, Texas. He was a graduate of Magnolia High School and attended Southern State College (SAU). He enlisted in the United States Air Force in 1959 and was honorably discharged in January 1963 as an Airman First Class. After serving in the military, he went to work as a computer analyst for United Gas Corporation in Shreveport, Louisiana and transferred to Pennzoil Oil and Gas Corporation in Houston, Texas, and then retiring from Devon Energy Corporation. He is preceded in death by his parents, daughter Kathy Lynn Watson, and his sister Norma Faulkner. Don is survived by his wife of 63 years Sylvia Gay Watson of New Braunfels, daughter Donna Paschal of Schertz, Texas, grandsons Daniel Paschal and wife Lindsey of Austin, Texas and Michael Paschal and wife Stephanie of Schertz, Texas, four great grandchildren, brother Daryl Watson and wife Yolanda of Stamps, Arkansas, sisters Mavis Housley and husband T.J. of Mabelvale, Arkansas and Alice Wilson of Stamps, a host of nephews, nieces, cousins, and friends. A visitation will be held on Tuesday, October 12, 2021 from 10:00 to 10:30 a.m. at Lewis Funeral Home, Inc. in Magnolia, Arkansas with a graveside to follow at 11:00 a.m. at the Magnolia Memorial Park Cemetery with Don’s nephew, Rev. Todd Wilson of Sulphur Springs Missionary Baptist Church officiating. Memorial donations may be made to the Sulphur Springs Missionary Baptist Church, PO Box 44, Quitman, AR 72131. To sign the online guest book or to share a memory visit www.lewisfuneralhome.biz

The family of Don Golden Watson created this Life Tributes page to make it easy to share your memories.

Send flowers to the Watson family.