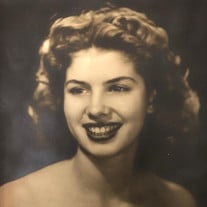 Mrs. Dorothy Jeanne Fincher, 92, of Magnolia, Arkansas passed away Tuesday, June 15 at her home in Magnolia, Arkansas with her family at her side. She was born October 25, 1928 in Waldo, Arkansas to the late Travis Calvin Jackson and Mary Jeannette Blackman Jackson. She was a graduate of Waldo High School and the University of Arkansas in Fayetteville where she was awarded a B.A. degree in History with a minor in Music. She was a member of the Chi Omega Sorority. Later, she completed courses at Southern Arkansas University where she earned a teaching certificate. Her childhood was spent in Waldo, with summers in New York City where her father was the shortstop for the New York Giants. She began her married life as a homemaker, followed by years of teaching history and music in the public school at Waldo. Following her retirement from teaching, she worked at Peoples Bank Magnolia for many years by the side of her husband, Harold Fincher, who was the CEO of the bank. She was a lifelong member of the United Methodist Church, first in Waldo, and then in Magnolia. She played piano and organ in the Waldo church and sang in the choir in Magnolia. She was a member of the Clegg Open Door Sunday School class and a member of the Magnolia Chapter AN PEO. She and Harold shared a passion for learning, reading, and encouraging others to fulfill their educational dreams. Together, they provided scholarships for many local students to attain a higher education at Southern Arkansas University, especially non-traditional students and those with an interest in the field of business. In addition to reading and music, she enjoyed cooking, sewing, traveling, tennis and snow skiing (in her younger years) and spending time with her beloved family. She loved playing bridge and was a pretty fair player of Texas Hold’em poker as many will tell you who witnessed her win the local charity poker tournament at age eighty-seven! Each year, beginning in 1964, she and Harold took the family to the Florida Gulf Coast for two weeks and returned every year for the next fifty-five years. She was a Girl Scout and Brownie Troop Leader and also taught tennis briefly in Waldo. She worked regularly at the Stew Pot serving free meals to those in need. She was a member of the Board of Directors of the Peoples Bank for over sixty years. She leaves behind a legacy of a life well-lived, of a loving and devoted family, and the enrichment of all who had the privilege to know her. She was preceded in death by her parents, Travis and Mary Jackson, and her husband of sixty-two years, Harold. She is survived by her brother, William Travis Jackson and wife Peggy of Sandia Park, NM; son Clark Fincher and wife Terrye of Searcy, AR; daughters Mary Fowler and husband Chuck of Magnolia and Betty Harris and husband Stan of Little Rock, AR; grandsons Jonathan Baird and wife Emily of Magnolia, Brian Baird and wife Ashley of Magnolia, Stephen Harris of Little Rock; granddaughters Ashley Franz and husband Justin of Searcy, AR, Amy Fincher of Towson, MD, Molly Mitchell and husband James of Little Rock, AR, Kelly Brown and husband Brandon of Little Rock, Katie Harris and husband Ignace Mugabo of Little Rock, AR, and Savannah Harris of Little Rock; step-grandson C. J. Fowler, Jr., wife Helen, and daughters Lauren and Sienna of Houston, TX; great grandchildren Bradley , Michael , Natalee , Bonnie, and Jonathan Franz; Addie Leigh, Piper, Haddon, Josiah and Judah Baird; Braden, Ryan, and Dani Baird; Maddox and Zuri Brown, as well as many other dear relatives and close friends. Everyone just called her D.J. She will be missed, leaving a devoted family who will continue to benefit from and follow the powerful example she left them by living life gracefully, lovingly, unselfishly, and always striving for excellence. A memorial service will be held at the First United Methodist Church in Magnolia, AR on Sunday, July 11, 2021 at 2:00 PM with visitation to follow at the church. Dr. Gary Maskell will officiate. Memorial donations may be made to the SAU Foundation, 100 E. University MSC 9174, Magnolia, AR 71753-2181, First United Methodist Church, 320 West Main, Magnolia, AR 71753, or the charity of the donor’s choice.

Mrs. Dorothy Jeanne Fincher, 92, of Magnolia, Arkansas passed away Tuesday, June 15 at her home in Magnolia, Arkansas with her family at her side. She was born October 25, 1928 in Waldo, Arkansas to the late Travis Calvin Jackson and Mary... View Obituary & Service Information

The family of Dorothy Jeanne Fincher created this Life Tributes page to make it easy to share your memories.

Send flowers to the Fincher family.