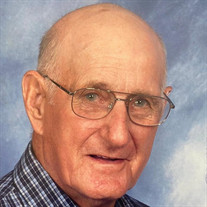 Earl Austin Daniel, 97, of McNeil, AR passed away Tuesday June 7, 2022, in Texarkana, TX. He was born to Elmer and Pauline Daniel on September 17, 1924, in Emerson, AR. Earl is preceded in death by his wife of 66 years, Vivian Short Daniel, his parents and four sisters, Beatrice, Louise, Patsy and Margie. He is survived by his sons, David Daniel (Kay) of Magnolia, AR, Larry Daniel (Lori) of Nashville, AR, Ronnie Daniel (Gayle) of Mc Neil, AR and Sherry Warren (John) of Round Rock, TX. Grandsons Chad Daniel (Jamie), Scotty Daniel (Ashley), Jeff Daniel (Jenni) all of Magnolia, Bryan Daniel (Reagan) of Parker, TX, Kyle Warren of Boston, MA, Richard Daniel (Crystal) of Wylie, TX, granddaughters Melissa Matthews (Matt) of Magnolia, AR and Shannon Keene (Pat) of Austin, TX, 16.75 great grandchildren, and one sister, Pansy Layfield of Haynesville, LA. Mr. Daniel worked at Partee Mill as a logging crew supervisor and scaler for several years and then later worked and retired from Alumax after approximately 30 years. He was a lifelong cattle farmer and avid gardener. One of his hobbies was woodworking. He made many wagons, toy trucks, baby doll beds and even weaved beautiful baskets. “Papaw Daniel” loved his family and had a very special bond with his grandchildren and great grandchildren. Going to Mamaw and Papaw’s house was like taking a step back in time to a simpler, wholesome time where playing with wooden trucks and baby doll beds built by his own hands was how they spent many days. Every family meal started with a blessing followed by Papaw, who always sat at the head of the table, cutting the cornbread and eating it with vegetables he grew in his garden from purple hull peas to sweet potatoes. His front porch swing was the centerpiece of many hours for the entire family. Hours were spent waving at neighbors passing by, watching hummingbirds, watching the sunsets, cows and grandchildren play. Yearly family pictures were taken there also. Papaw gave us the perfect example/role model of what a loving husband and father should be. Mamaw and Papaw loved each other fiercely and always took care of each other. They were simple people who worked hard and loved each other and their family. They didn’t care about material things but were so rich in the things that truly mattered. He was known throughout the county for his immaculate garden and yard. His specialties were peas, greens and sweet potatoes. Visitation with the family will be Thursday, June 9 from 6:00 to 8:00 p.m. at Lewis Funeral Home, Inc. in Magnolia, AR. Funeral services will be Friday, June 10 at 10:00 a.m. at Lewis Funeral Home Chapel with Bro. Danny Bullock officiating. Burial will follow at the New Hope Cemetery in McNeil, AR. Pallbearers will be Chad Daniel, Bryan Daniel, Scotty Daniel, Richard Daniel, Jeff Daniel and Patrick Daniel. Honorary pallbearers will be Kyle Warren, Shannon Warren and Melissa Matthews. In lieu of flowers, memorial donations may be made to First Baptist Church, 451 Gum St., McNeil, AR 71752. To sign the online guest book or to share a memory visit www.lewisfuneralhome.biz

Earl Austin Daniel, 97, of McNeil, AR passed away Tuesday June 7, 2022, in Texarkana, TX. He was born to Elmer and Pauline Daniel on September 17, 1924, in Emerson, AR. Earl is preceded in death by his wife of 66 years, Vivian Short Daniel,... View Obituary & Service Information

The family of Earl Austin Daniel created this Life Tributes page to make it easy to share your memories.

Send flowers to the Daniel family.