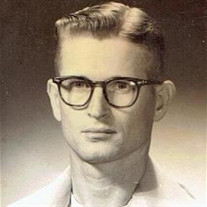 Edgar Lamar Joiner, of Magnolia, passed away on March 11, 2019, following an extended illness. He was born in Magnolia, AR, September 25, 1933, to Edgar and Lorene (Wilson) Joiner. He graduated from Magnolia High School in 1951. He joined the US Air Force, and graduated from their Intelligence School. He served in the US Air Force from January, 1952, through August, 1972. He retired with the rank of Master Sergeant. Lamar is a veteran of the Korean conflict and served two tours of duty during the Viet Nam war. During his Air Force career he was stationed at bases and US embassies all over the USA and the world, including Denver, Colorado, El Paso, Texas, Bossier City, Louisiana, San Antonio, Texas, Wichita Falls, Texas, Tucson, Arizona, Spokane, Washington, Bangor, Maine, Anchorage, Alaska, Langley, Virginia, Japan, Goose Bay Labrador, Taiwan, Korea, Viet Nam, Germany, Laos, and many others on temporary assignments. He retired from his final assignment at Barksdale AFB in Bossier City, Louisiana where he served several times during his career, and moved back to his home town. On January 14, 1956, he married the love of his life, Faye (White) Joiner in Greenville, MS. They honeymooned in Louisiana. Together they shared 7 wonderful years until her death in 1963. He was preceded in death by his parents, Faye, his wife, his brother Bill Ray Joiner and sister-in-law, Oleta (Blount) Joiner, sister, Sue (Joiner) Burrow and brother-in-law Gene Burrow, brother-in-law, Hewitt Gene Smith, step sister, Blanche Louise Joiner, brother-in-law, Willie Harrell White, and sister-in-law Mary Frances White. He is survived by sister, Martha Lorene Aldridge Smith, step-son, Michael Moore, daughter-in-law, Jane Moore, Granddaughter, Kimberly Moore Grune, (husband) Ed Grune, Great- Granddaughter, Corrie Grune and numerous cousins, nephews and nieces. He will be remembered for being a loving son, brother, husband, father, uncle, grandfather and great-grandfather as well as being a true patriot who loved his country. The family would like to express their appreciation and gratitude to Wentworth Place in Magnolia and Kindred Hospice for the quality care Lamar received from them. There will be a reception for family and friends on Saturday, March 16, 2019, at Lewis Funeral Home, Inc. in Magnolia, AR, starting at 1:00 pm. No other formal services will be held but please feel free to join the family on Saturday. To sign the online guest book or to share a memory visit www.lewisfuneralhome.biz

Edgar Lamar Joiner, of Magnolia, passed away on March 11, 2019, following an extended illness. He was born in Magnolia, AR, September 25, 1933, to Edgar and Lorene (Wilson) Joiner. He graduated from Magnolia High School in 1951. He joined... View Obituary & Service Information

The family of Edgar Lamar Joiner created this Life Tributes page to make it easy to share your memories.

Send flowers to the Joiner family.