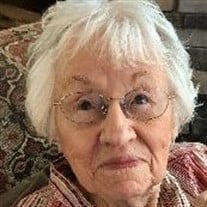 Ellen Arlene (Rogers) Minor, after nearly 97 wonderful years, Arlene went to be with the Lord on January 8, 2020. She was at home in the company of loving family giving constant attention and gentle care right up until her last moment on this earth. Arlene (who we’ll call Mother from now on because she liked that) was born February 01, 1923 at home in Magnolia, Arkansas to Trudy Lou and Samuel Carl Rogers. She graduated from Magnolia High School in 1940, an alumna of Magnolia A&M (known today as SAU but always Mule Riders), and became a Registered Nurse upon graduation from Jefferson Davis School of Nursing, Houston Texas, in 1948. Mother lived a very happy and successful life but it began with a sad start. Her mother, Trudy died of tuberculosis when Mother was only 5. Mother spent most of her first five years living “at grandmother’s house” because she and her older sister Bernice had to be kept safely away from their mother while she lost her battle to the disease at home. On an occasion, Mother would mention that when a little girl, she would play outside and pretend that her mother was watching her. A week or so ago, Mother said that along with Jesus, she was looking forward to finally seeing her mother again. Happily, now those reunions along with many more are taking place in an eternal heavenly celebration! Mother was very proud to be an RN. She met James “Red” Minor who was a Superintendent for The Baldwin Company (now known as Baldwin & Shell) during an expansion and remodel for the Hospital in Magnolia. They married, Mother retired from nursing, and they moved to Little Rock living there until Red’s death in 1997. Mother continued to live in Little Rock for several years, moved to Northwest Arkansas for a time, then moved to Benton with her son Jim and his wife in 2018 where she remained. She was also a devoted sister, mother, grandmother, great grandmother, and friend. She loved and enjoyed her best friends in her St. Luke Church Sunday School Class. She kept in touch with her lifelong nursing friends Mini Mae and Sophie until each of them passed away. She never left the continent but traveled to nearly every state in the United States and five Provinces of Canada. She loved all kinds of music, attending concerts into her 90’s including her favorite, Keith Urban. She was an avid reader, staying up with her books until after midnight most nights. Mother loved life and lived it well. She accomplished her life’s mission, told her children about Jesus and was the most wonderful Mother! Mother was preceded in death by her husband Red Minor, her parents Samuel Carl, and Trudy Rogers, stepmother Birdie Rogers, stepson Raymond “Red” Minor, her sister Bernice Kocher, her beloved first cousin Margie Wise, and daughter in law Carole (Minor) Rodgers. She is survived by her daughter, Sue Ellen, and husband John Kyle Bille; her son Jim, and wife Rebecca Minor; grandchildren Cheryl and husband Larry Ringgold; Ray Minor and wife Tacy; Kimberly and husband Major Jonathan Lewenthal; Brain Hall and wife Kaitlin; Sharon and Tim Matulewicz; Lauren Dellapelle and daughter Zeriah, LCpl James T. Minor, Samuel Minor, Abi Minor, Lela Minor; Great grandchildren Lauren Lewenthal, Presley Matulewicz, Oscar Hall. Devoted cousin Leslie Knowles and her family; two first cousins and terrific guys, Larry Burrow and O.L. Wise; and her dearest friend, Donna Sayers. A graveside memorial service will be held at 4:30 p.m. this Sunday, January 12th at Memorial Park Cemetery, Magnolia, Arkansas under the direction of Lewis Funeral Home, Inc. in Magnolia. To sign the online guest book or to share a memory visit www.lewisfuneralhome.biz

Ellen Arlene (Rogers) Minor, after nearly 97 wonderful years, Arlene went to be with the Lord on January 8, 2020. She was at home in the company of loving family giving constant attention and gentle care right up until her last moment... View Obituary & Service Information

The family of Ellen Arlene Rogers Minor created this Life Tributes page to make it easy to share your memories.

Send flowers to the Minor family.