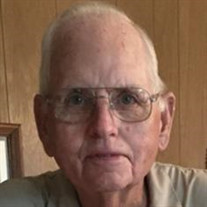 Elmer Lee (EL) Maness, 88, of Magnolia, Arkansas passed away on Sunday, March 3, 2019 at John R. Williamson Hospice House in El Dorado surrounded by his family. E.L. was born on June 9, 1930 in Magnolia, Arkansas to the late Alvin Maness & Nellie (Hixon) Maness. He was known by many friends as Cueball. He retired from the Magnolia Coca-Cola Bottling Plant. He was an avid fisherman and enjoyed working in his vegetable garden. He was a wealth of knowledge. His children and grandchildren could ask him how to fix things and he always had the answer. He was a member of First Baptist Church of Magnolia. He is preceded on death by his parents; sister, Louise (Maness) Wyrick; son-in-law, Jerry Bailey; sister-in-law, Melba Morehead; brother-in-law, Bobby Herbert; nephew, Jerry Wyrick. He is survived by his loving, devoted wife of 67 years, Mary (Cearley) Maness; his children, Debbie Bailey and Randy Maness of Magnolia; grandchildren, Jeff White, Ashley White, and Becky (Cody) Slaughter all of Magnolia, Melissa (Jeremy) Franks of Benton; step grandchildren, James (Mandy) Nations of Emerson. He is survived by his greatest treasures, his beloved great grandchildren, Christian and Caleb White of Star City, Kamryn and Bentley Franks of Benton, Kaden Slaughter of Magnolia; step great grandchildren, Breana and Hadley Slaughter of El Dorado, Kinsley Nations of Emerson; sister, Shirley (Rabbit) Wilson of Magnolia; sister-in-law Carolyn (Dalton) Allison; along with numerous nieces and nephews. Graveside services will be Wednesday, March 6, 2019 at 2:00 p.m. at Memorial Park Cemetery with Dr. Eric Goble officiating under the direction of Lewis Funeral Home, Inc. in Magnolia. Visitation will be Tuesday, March 5 from 6:00 to 8:00 p.m. at the funeral home. In lieu of flowers, the family requests memorial contributions be made to Lifetouch Hospice, 2301 Champgnolle, El Dorado, AR 71730 or to First Baptist Church, PO Box 456, Magnolia, AR 71753. To sign the online guest book or to share a memory visit www.lewisfuneralhome.biz

The family of Elmer Lee E.L. Maness created this Life Tributes page to make it easy to share your memories.

Send flowers to the Maness family.