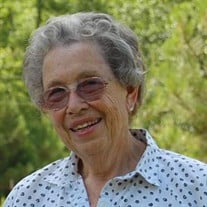 Emma Jean Allen was the last of 12 children born to Walter Howard Allen (1876–1950) & Minnie O’Della Smith (1882-1981) at their home in Spotville, Arkansas. Born March 7, 1928, she passed away at the age of 93 on October 31, 2021, after breaking a leg a month prior. She was preceded in death by her close-knit adult siblings: Oswell Allen, Gertrude Stover, Docia Brasher, Hubert Allen, Curtis Allen, Doris Roberson, Geraldine Talley, and Harold Allen. At the age of 16, in 1944, she married B.B. Gunnels Jr. and managed the Gunnels Store in Village for a year during the war while her husband farmed and worked at his father’s sawmill and cotton gin. In 1951 she took a beauty course in El Dorado and opened a beauty shop in her home, working as a hairdresser for the surrounding community for over 60 years. She was an astute, independent businesswoman, taking on the Gunnels farm even before her father-in-law’s death in 1955. She raised cattle there until 2015 with the help of the Easter and Davis families. Dolly Davis worked as a housekeeper and cook for Jean until 1988, when her daughter Annie Bell Parsha took over as housekeeper, cook and eventually caregiver for Emma Jean from 1988 until very recently. In 1970, Emma Jean and her husband built a new house and beauty shop on Hwy. 82. B.B. died in 1972, and Emma Jean married again 27 years later: Kline ‘Chuck’ Hendricks had attended school with her at Village. He passed away in 2019. Emma Jean took an interest in the Village schoolhouses and gym after Village consolidated with Magnolia in 1984, and was very active in community events there, including the Deer Dog Festival, Arts & Crafts Shows, BBQs, and various civic events and fundraisers. Emma Jean has always had a strong interest in her family history and was an active member of SoWeAr (SOuth WEst ARkansas) Genealogical Society, contributing and gathering stories from family, friends, and neighbors. In 2008 and 2010, Emma Jean actively participated in two Allen Cousin Camps for several grandchildren of her nephews and nieces. At the homeplace, where the campers slept, Emma Jean had an outhouse built, opened an old water well, and rebuilt a chicken coop so that the children could better understand what early life at the 1873 Allen homeplace had been like. While she had no children of her own, Emma Jean has always been close to her thirteen nieces and nephews: Kay Grayson and Bob Roberson (who both predeceased her), Ann Wilson of Spring TX, Leroy Roberson of Highland Village TX, Berry Lynn Hill of Pleasant Hill CA, Marjorie Lensgraf of Knoxville TN, Jan Thomas of Bentonville AR, Kathy Freeman and Barbara Allen of Mt. Pleasant TX, Jim Allen of Little Rock AR, Phoebe Sue Allen of Austin TX, and Carol Smoak of Palm City FL. Special thanks from the family to nephew Bill Allen and wife Beverly, and great nephew Roy Gean Roberson and wife Shirey, who have overseen Emma Jean and Chuck’s care in the last decade. In addition to Annie Bell Parsha, the family is also grateful to caregivers Carolyn Johnson, Tina Hicks, Nita Jo Strange, and Kokita Love. A visitation will be held on Thursday, November 4, 2021, at 1:00 p.m. at Lewis Funeral Home, Inc. in Magnolia, Arkansas with a funeral service to follow at 2:00 p.m. with Bro. Ken Hipp officiating. Emma Jean was a member of the Village Methodist Church, and her burial will be in the Village Methodist Church Cemetery.

The family of Emma Jean (Allen) Gunnels Hendricks created this Life Tributes page to make it easy to share your memories.

Emma Jean Allen was the last of 12 children born to Walter Howard...

Send flowers to the Hendricks family.