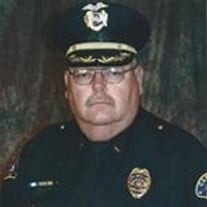 George Lee Ingram, 67, of Conway, AR, died Friday, August 24, at Conway Regional Medical Center. He was born in Prairie Grove, AR to the late William “Bill” Lee Ingram and Margaret Newman Ingram. George wore many hats throughout his life. He served in the Arkansas National Guard for 10 years. He served the on the senate for the Jaycees for many years. He worked as an EMT and a restaurateur. He was the owner of Magnolia Drilling Fluids and worked as a private investigator. By far, his passion in life was law enforcement. Throughout his 35 year career, he worked as a dispatcher, jailor, road deputy, patrolman, and criminal investigator. He was a proud officer for the following departments: Magnolia Police Department; Columbia County Sheriff’s Office; Waldo Police Department; and the Camden Police Department. He retired as a Lieutenant for the Camden Police Department. George received numerous accolades throughout his career including being a four-time recipient of the Governor’s Certificate from the Arkansas Governors for Community Service. He was an active member of the International Homicide Investigators Association and the International Association of Arson Investigators. He received a City of Camden Civil Service Commendation, for exceptional service and dedication and a Meritorious Service Medal from the Camden Police Department. He logged over 2500 hours of police training throughout his career. Survivors include his daughters, Carrie Schomburg and husband Jeremy of Haughton, LA and Cassandra Ingram of Conway, AR; grandchildren Elaine, Jacob, and Sara Schomburg of Haughton, LA; siblings Mike Ingram and wife Susan of Murfreesboro, AR, Pam Reed of ElDorado, AR, and Debbie Burt of Tupelo, MS; a host of nieces, nephews, and cousins; and his faithful pug companion, Rochester. Memorial Services will be held at the chapel of Lewis Funeral Home, Inc. in Magnolia, AR on Saturday September 1, at 1pm with Steve Crane officiating. A reception will follow at Immanuel Baptist Church, 1823 East North St., Magnolia. The family requests memorial contributions are sent to the Arkansas Concerns of Police Survivors (COPS), PO Box 13036, Maumelle, AR 72113 (501) 425-0645, www.arkansas.cops.org To sign the online guest book or to share a memory visit www.lewisfuneralhome.biz

The family of George Lee Ingram created this Life Tributes page to make it easy to share your memories.

Send flowers to the Ingram family.