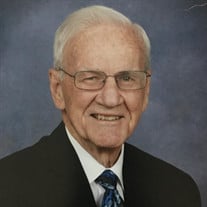 George Wallace “Dick” Sutton, 81, of Cypress, Texas passed into the loving arms of our Lord on May 1, 2019. He was born on March 1, 1938, in Lockesburg, Arkansas to the late Lynford Earl and Nora Mae (Aylor) Sutton. Dick was a camp manager for 24 years at Beach Springs Baptist Camp in Louann, Arkansas, before he retired in 2003 and moved to Magnolia, Arkansas. Prior to managing the camp, he worked as a salesman for Richie Grocery Company in both Hope, Arkansas and Waldo, Arkansas. In December, 2015, Dick and his wife, JoAnn, moved to Houston, Texas, to be near his daughter and grandchildren. He was a member of Westway Baptist Church in Houston, Texas, at the time of his death. He previously attended College View Baptist Church in Magnolia, Arkansas. Dick had a strong faith and throughout his life his greatest longing was to serve the Lord every day. Dick was an ordained deacon and Sunday school teacher. He also enjoy spending time with family and watching sporting events. Dick and Vivian Helen (Otwell) Sutton were married in 1956. They had a daughter, Cindy and two sons, David and Jon, before Helen’s death in 1985. In 1989, Dick married JoAnn Morehead and with this union was blessed with three step-daughters, Terry, Vicki and Susan. Dick is preceded in death by his parents Earl and Mae Sutton, wife Helen (Otwell) Sutton, wife JoAnn (Morehead) Sutton, son David Wallace Sutton, son Jon Daniel Sutton, and three sisters, Wanda Jean McNatt, Icie Gem Smith, and Mary Lynn Strange. Dick is survived by children, Cindy Henry (Mark); Terry O’Neil (Brian), Vicki Studstill (Perry), and Susan Reede (Barry); sister, Peggy Sue Fray; grandchildren, Ryan (Lucky), Emily (Karen), and Stephen (Sarah) Henry, Sean and Patrick O’Neil, Ben Studstill, Tyler, Logan, and Kacie Reede; great-grandchildren, Penelope and Victoria In, Ryan and Jonathan Henry, Sutton Henry-Peden, and Beckett Reede; and numerous nieces and nephews. Visitation with the family will be held on Saturday, May 4, 2019 at 1:00 p.m. at Lewis Funeral Home, Inc. in Magnolia, Arkansas with a Celebration of Life service to follow at 2:00 p.m. with Bro. Paul Bullock officiating. Burial will be at the Shiloh Cemetery in Lamartine, Arkansas. Memorial donations may be made to Westway Baptist Church, 11207 Perry Rd, Houston, TX 77064 or College View Baptist Church, 2121 North Washington St., Magnolia, AR 71753. To sign the online guest book or to share a memory visit.www.lewisfuneralhome.biz

The family of George Wallace Dick Sutton created this Life Tributes page to make it easy to share your memories.

Send flowers to the Sutton family.