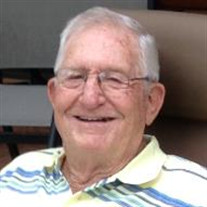 Harry Carlon Smith, also known as “Spec,” of Magnolia, Arkansas passed away Saturday, July 3, 2021, at the age of 89 at the CHI St. Vincent Infirmary Hospice Center in Little Rock. He was born on February 2, 1932, in Cleveland, Arkansas to the late Ira Brice and Bertha Lee (Colay) Smith. Harry loved the Lord and was a member of the First Baptist Church and the Faith Sunday school class. He was known for; having a servant’s heart, being able to fix anything, popping the best popcorn, pacing back and forth if someone was late arriving for something, cooking the best breakfasts and frying the best catfish around. He also enjoyed spending his time fishing and writing poems. Harry and his wife Nancy loved watching their children and grandchildren play all types of sports and loved watching sports on TV, especially the Razorbacks. He served in the United States Army from 1954-56 and attended the University of Arkansas becoming a structural engineer. He worked for Unit Structures until he retired in his late 70’s, but continued doing contract work until his short illness began. His most notable accomplishment, besides his family, was his work on the roof structure of the Crystal Bridges Museum. If you visit the museum, look up at the turtle shell shaped roof and you will see his handiwork. He is survived by his wife of 62 years, Nancy Neill Smith of Magnolia; children Tracy Smith and wife Renee of Little Rock, Wendy Mikula and husband Jim of Ft. Smith, and Shelly Pletcher and husband Mark of Magnolia; grandchildren Drew Smith and wife Sydney of Little Rock, Ty Smith and wife Chelsea of Summerville, South Carolina, Kile Pletcher and wife Sydney of Conway, Kurt Pletcher of Magnolia, Katherine Pletcher of Magnolia, Casey Mikula of Little Rock, Brandi Mikula of Fayetteville, and Dusty Mikula of Little Rock; seven great grandchildren; sisters Johnnye Hartje of Conway and Donna Camp of Shreveport, Louisiana. Funeral services will be held on Wednesday, July 7, 2021, at 10:30 a.m. at the First Baptist Church with Bro. Dustin Wisely officiating under the direction of Lewis Funeral Home, Inc. in Magnolia. Interment will be in the Magnolia Memorial Park Cemetery. Pallbearers will be his grandsons Drew Smith, Ty Smith, Kile Pletcher, Kurt Pletcher, Casey Mikula, and Dusty Mikula. Memorials may be made to the First Baptist Church Senior Adult Ministry.

The family of Harry Carlon "Spec" Smith created this Life Tributes page to make it easy to share your memories.

Send flowers to the Smith family.