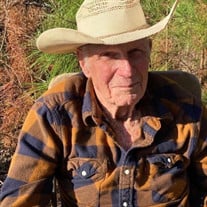 Hugh Barrett Howell, 90, of Magnolia, Arkansas entered Heaven on Friday, March 11, 2022 from his home, Witts End Farm in the Marysville Community. He was born December 30, 1931 to the late Hughie Lafayette and Ruth Ora Hyde Howell and was also preceded in death by his 3 brothers, Delbert Thomas Howell, John Carl “J.C.” Howell and Jack Wayne Howell. Hugh is survived by his wife of 66 years, Kathleen Braswell Howell, two daughters, Kay Barger (Steven) of Ward, AR and Vicki Hollensworth (Jerry) of Magnolia, AR, two grandsons, Trent Hollensworth (Amelia) of Benton, AR and Tyler Griffin (Monica) of Batesville, AR and one granddaughter, Hannah Bussey (Stacy) of Waldo, AR as well as many nieces, nephews, and friends. The joy of his life was being Grandpa to his grandchildren and great-grandchildren: Cora Elise Hollensworth, Hugh Hollensworth, Amos Hollensworth, Nevan Lewallen all of Benton, AR, Mattie Bussey of Waldo, AR, Barrett Griffin and Owen Griffin of Batesville, AR. He served in the United States Air Force during the Korean War, and had many stories of being stationed in the Philippine Islands, working on planes and friends he made. Three months after returning to Magnolia, Hugh and Kathy met. After a 3 month courtship, they were married. They celebrated their 66th anniversary September 2021. Hugh gave many years of dedication to Southern Extrusion/Howmet/Alumax until he retired and enjoyed cooking for the company gatherings. Hunting, fishing and RV traveling were some of his most enjoyable memories. He was an excellent cook, whether it be crawfish boils, fish fries or grilling for family and friends. Hugh—“Grandpa” was a wealth of information and was always available. Anyone could call on him for help. Until the end, he was teaching the family all sorts of things, he instilled the belief that if it’s worth doing, do your best, give your all, not halfway. There’s not a can’t, just a can’t hardly. Funeral services will be Thursday, March 17th, at the Marysville Cemetery, Marysville Cemetery Road, Magnolia, AR, with Bro. Mike Goodwin and Rev. Melissa Maskell officiating. Visitation will be at 1:00p.m. and the service at 2:00p.m. under the direction of Lewis Funeral Home. Pallbearers will be Trent Hollensworth, Stacy Bussey, Roger Hudgens, Tommy Vinson, Steve Braswell and Jeff Tipton. Honorary Pallbearers will be Dr. John Howell, Dr. Mark Dixon, Tommy Sumner, Mike Boyd, Dennis Mason and Chuck Rowe. The family requests memorials be made to: Marysville United Methodist Church/Cemetery Fund 11233 Magnolia Highway, Magnolia, AR 71753 or CCAPS Animal Shelter 510 West Columbia St. Magnolia, AR 71753 To sign the online guest book or share a memory visit www.lewisfuneralhome.biz

Hugh Barrett Howell, 90, of Magnolia, Arkansas entered Heaven on Friday, March 11, 2022 from his home, Witts End Farm in the Marysville Community. He was born December 30, 1931 to the late Hughie Lafayette and Ruth Ora Hyde Howell and... View Obituary & Service Information

The family of Hugh B. Howell created this Life Tributes page to make it easy to share your memories.

Send flowers to the Howell family.