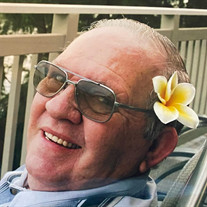 James H. Hall of Mt. Ida, Arkansas, was called to his Heavenly home on June 8, 2021, at the age of 84. Born July 18, 1936, to C.C. and Euna Mae Hall in Stephens, Arkansas. James was a blessing to all who knew him. His love for Christ, fishing, and traveling with his family was nothing compared to the love he had for his wife of 65 years, Carlyn Peace Hall. Having previously resided in Stephens, Little Rock, England, and Pine Bluff, he was a staple in Mt. Ida and could be found at the counter of Able Parts, his family business – if not, you could bet he would be on the peaceful waters of Lake Ouachita, fishing for crappie. James was a deacon for 60 years at various churches, and last served at Landmark Missionary Baptist Church, Mt. Ida. He is preceded in death by one son: Clennon Hall, his parents: C.C. and Euna Mae Hall, Siblings: Charles Hall (Dixie), Ralph Hall, Hazel Williams (L.L.), Lena Autrey (Raymond), Minnie Tribble (Ben), Betty Sue Pennington (Roy), one brother-in-law: Lewis Peace, and a host of extended family and friends that have now welcomed him home. James is survived by the love of his life, Carlyn Peace Hall of Greenbrier, his youngest son: William Hall (Karen) of Greenbrier, grandchildren: Katie Hall Garner (Jerry) of Little Rock, Ginnie McGee (Stewart) of Greenbrier, Christi Hall Hensley (Josh) of Conway, Brandon Hall, and Chad Hall, one great-grandson: Clint Hall, Brothers-in-law, Len Peace (Karen) and Ben Peace (Barbara), his best furry friend: Rascal, and many relatives and friends who will miss him dearly. Services will be held Saturday, June 12, 2021, at Lewis Funeral Home, Inc. in Magnolia, Arkansas. Visitation will begin at 1:00 p.m. with a memorial service to follow at 2:00 p.m. The graveside service will be held at Stephens Cemetery in Stephens, Arkansas. In lieu of flowers, our family asks that donations be made to the American Diabetes Association (donations.diabetes.org) or Landmark Missionary Baptist Church, P.O. Box 426, Mt. Ida, Arkansas 71957.

The family of James H. Hall created this Life Tributes page to make it easy to share your memories.

James H. Hall of Mt. Ida, Arkansas, was called to his Heavenly...

Send flowers to the Hall family.