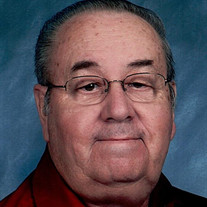 James B. Wallace, 84, of Magnolia, AR passed away Saturday, August 17, 2019 at the Magnolia Regional Medical Center. James was born on July 27, 1935 in Eagle Mills, AR to the late James Vernon and Nora Viola (Harrison) Wallace. He was a member of the First Baptist Church where he was formally a Sunday school teacher and served his country from 1961 to 1962 in the United States Army. James was the Data Systems Analyst for Firestone and Amfuel. He was a 32nd Degree Mason and served as Grand Master of the Columbia Lodge #82 and was previously active in other community organizations. His passion and love for aviation and the patience and ability to focus on tiny details, led him to enjoy building model airplanes. He furthered that interest into flight simulation video gaming with his grandchildren. James was preceded in death by his parents. He is survived by his wife of 61 years Alverne Wallace of Magnolia, AR; daughters, Tena Simpson and husband Keith of Magnolia, AR and Vicki Brown and husband Craig of Benton, AR; and grandchildren, Hayden Simpson of Magnolia, AR, Landon Simpson of Magnolia, AR, Logan Thompson of Shreveport, LA, and Caylin Thompson of Conway, AR. Funeral services will be held at 2:00 on Wednesday, August 21, 2019 at the Lewis Funeral Home Chapel with Bro. David Watkins officiating. Burial will follow at the Antioch East Cemetery under the direction of Lewis Funeral Home, Inc. in Magnolia, AR. Visitation will be from 1:00 to 2:00 PM on Wednesday at the funeral home. Pallbearers will be Charlie Couch, Mike Harwell, Ted Harwell, Willis Beene, and Logan Thompson. Every beat of his heart was for the love of his Lord and his family. He had a high moral compass and expected no less of his family. He was always there to listen, provide a loving hug or give advice if needed. He was not afraid to show emotion and he never left without saying “I Love You.” His selfless love and devotion for his wife and family was unsurpassed. The family requests memorial donations are sent to First Baptist Church, PO Box 456, Magnolia, AR 71754. To sign the online guestbook or leave a special memory please visit www.lewisfunerlahome.biz .

James B. Wallace, 84, of Magnolia, AR passed away Saturday, August 17, 2019 at the Magnolia Regional Medical Center. James was born on July 27, 1935 in Eagle Mills, AR to the late James Vernon and Nora Viola (Harrison) Wallace. He... View Obituary & Service Information

The family of James B Wallace created this Life Tributes page to make it easy to share your memories.

James B. Wallace, 84, of Magnolia, AR passed away Saturday, August...

Send flowers to the Wallace family.