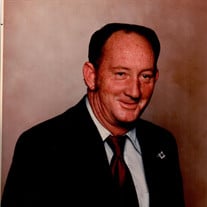 James Isaac Watson, 74, of Emerson, Arkansas passed away at his home on Saturday, April 23, 2022. James was born on February 18, 1948, in Taylor, Arkansas to the late Raymond and Clara (Mayfield) Watson. He worked as a leadman and retired after 42 years from the Arkansas State Highway Transportation Department. James was a member of the Cumberland Presbyterian Church. He was a member of the Hughey Masonic Lodge #70 of Taylor, AR where he was a 32nd Degree Mason, and the Grand Lodge of Arkansas. He was an avid outdoorsman who loved deer hunting. He is preceded in death by his parents Raymond and Clara (Mayfield) Watson, grandson Ryan Watson, and an infant brother. James is survived by his wife of 52 years Carolyn Watson of Emerson; sons James Allan Watson and wife Doni of Hope and John Watson of Emerson; grandchildren Amber Stuart and husband Nick, Dylan Watson, and Dustyn Watson of Hope, Jessi Turney and husband Justin of Cabot, JonIsaac Watson of Little Rock, Bradyn Watson and Josh Watson of Emerson; brothers and sisters Martha Ann Kelley and Talmadge Watson of Lamartine, Elbert Wayne Watson and Jimmy Watson of Taylor, Jerry Vaughn of Springhill, Louisiana, Sherry Youngblood of Dubberly, Louisiana, and Bill Watson of Taylor; sister in law Jane Jeffus and husband Sam of Camden; brother in law Jimmy Williams of Haynesville, Louisiana; numerous nephews, nieces, cousins, and friends. Funeral services will be Friday, April 29 at 2:00 p.m. at Lewis Funeral Home, Inc. in Magnolia, Arkansas with Bro. Lyndell Chaffin officiating. Burial will follow at Western Cemetery. Visitation will be Thursday, April 28 from 5:00 to 7:00 p.m. at the funeral home. Pallbearers will be his grandsons Dylan, Brayden, Josh, JonIssac, Nick, and Justin. Honorary pallbearers will be Paul Ruth and James Skinner. To sign the online guest book or to share a memory visit www.lewisfuneralhome.biz

James Isaac Watson, 74, of Emerson, Arkansas passed away at his home on Saturday, April 23, 2022. James was born on February 18, 1948, in Taylor, Arkansas to the late Raymond and Clara (Mayfield) Watson. He worked as a leadman and... View Obituary & Service Information

The family of James Isaac Watson created this Life Tributes page to make it easy to share your memories.

James Isaac Watson, 74, of Emerson, Arkansas passed away at his...

Send flowers to the Watson family.