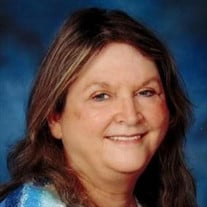 Janis Gail Millican, 59, of Magnolia, Arkansas passed away Tuesday, March 30, 2021 at the Magnolia Regional Medical Center in Magnolia. Janis was born on July 8, 1961 in Magnolia, Arkansas to the late Messer and Juanita (Martin) Goodwin. She was a member of the Macedonia Baptist Church and a teacher at the Lafayette County Middle School. She enjoyed camping with her family, traveling to see her children, and she loved spending time with her grandson Konner. She was preceded in death by her parents, brother Hershel Goodwin, and half-brother Pete Goodwin. Janis is survived by her husband of 39 years James Millican of Magnolia; children Gary Millican and wife Christy of Russellville and Kayla Smitherman and fiancé Kirk Wilkerson of Mt. Holly; grandson Konner Wilkerson of Mt. Holly; brothers Melvin Goodwin of San Antonio, TX and Jesse Goodwin of Houston, TX; sisters Kathy Pool of Houston, TX and Brenda Reeves and husband Lee Roy of Falcon; a host of nephews, nieces, cousins, and friends. Visitation will be held on Thursday, April 1, 2021 from 5:00 to 7:00 p.m. at Lewis Funeral Home, Inc. in Magnolia. Funeral services will be Friday, April 2 at 11:00 a.m. at Lewis Chapel with Bro. David Watkins officiating. Burial will follow at the Union Cemetery in Bodcaw, AR. Pallbearers will be Kirk Wilkerson, Bo Dearing, Justin Franklin, Dustin Greening, Gary Smitherman, and Tyler Green. Honorary pallbearer will be Lee Roy Reeves. To sign the online guest book or to share a memory visit www.lewisfuneralhome.biz

The family of Janis Gail Millican created this Life Tributes page to make it easy to share your memories.

Send flowers to the Millican family.