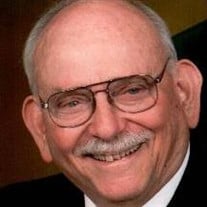 Jay W. Buchanan, 79, of Magnolia, AR passed away on June 5, 2019 at the Community Compassion Center of Magnolia. He was born November 1, 1939 in Lakeland, FL to F.C. and Marion Buchanan. After spending his early years in Lake Wales, FL, Jay served six years in the United States Navy and completed his music education degrees at Florida State University. He was a member of the First Baptist Church of Magnolia. His love of music gave him his career of band director in three Florida School districts and a mentor and teacher in the band department of Magnolia Schools. He spent many hours listening as well as composing musical numbers as he fought his battle with cancer. Jay is preceded in death by his parents, sister Betty Thullbery and brother F.C. (Bud) Buchanan. He is survived by his wife of 22 years, Rae Beasley Buchanan of Magnolia; nephews Chip Thullbery and Rob (Janet) Thullbery of Lake Wales, FL, John (Lea) Thullbery of Winston-Salem, NC; nieces Marion Thullbery and Sally Harbold of Durham, NC. He is also survived by two great nephews and two great nieces; and a host of former band students and friends both in Florida and Arkansas. Visitation with the family will be at 2:00 p.m. on Monday, June 10, 2019 at Lewis Funeral Home, Inc. followed by a memorial service at 3:00 p.m. with Bro. Brent Summerhill and Bro. Roger Dunlap officiating. Interment of Jay’s ashes will be in the Shiloh Union Cemetery in Buckner, AR. The family wishes to thank both Encompass Health of Magnolia and the Community Compassion Center of Magnolia for their loving care. In lieu of flowers the family requests memorial donations be sent to Encompass Health, 128 North Washington, Magnolia, AR 71753, First Baptist Church, PO Box 456, Magnolia, AR 71754, or other organizations of the donor’s choice. To sign the online guest book or to share a memory visit www.lewisfuneralhome.biz. Cremation services were provided by Lewis Funeral Home, Inc. in Magnolia, AR.

Jay W. Buchanan, 79, of Magnolia, AR passed away on June 5, 2019 at the Community Compassion Center of Magnolia. He was born November 1, 1939 in Lakeland, FL to F.C. and Marion Buchanan. After spending his early years in Lake Wales,... View Obituary & Service Information

The family of Jay W Buchanan created this Life Tributes page to make it easy to share your memories.

Send flowers to the Buchanan family.