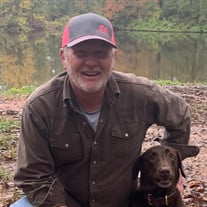 Jeffrey G. Hennessy, 64, a lifelong resident of Magnolia, AR, died unexpectedly March 26, 2020, in Lafayette County, AR, due to an industrial accident. Jeffrey was born in Magnolia on April 13, 1955 to the late Jesse Preston and Dorothy (Green) Hennessy. He was a 1974 graduate of Magnolia High School. One of his first jobs was working in the electrical business for Edwards Electric, where he learned the knowledge and skills to eventually open his own electrical business, Hennessy Electric. He went on to become a master electrician, industrial contractor, and co-owner of H&F Electric, with his longtime friend and business partner, Steve Flow. A strong, upstanding man of integrity, Jeffrey was a true Southern gentleman, unfailingly polite and protective of those he loved. He was a man of few words, but the words he spoke were meaningful, and he loved to slide in an unexpected joke. Jeffrey was optimistic, with a positive outlook, and he was willing to put in the hard work it took to make his dreams come true. He had a kind, calming presence about him, and was definitely someone you wanted on your side when there was a crisis. Jeffrey wasn’t a halfway person – he lived life to its fullest. He is survived by the love of his life, Robinette Stewart Hennessy, his wife of 34 years. Always together, they shared a meaningful life filled with both hard work and adventure. They loved the outdoors and could often be found parked beside a lake in their camper, riding motorcycles on their favorite mountain roads, hiking, fishing and boating. Jeffrey and Robin traveled often – an Alaskan cruise, a Mediterranean cruise, and all over America. The two raised a strong, loving family. In recent years, they divided their time between Magnolia, Hot Springs and their family cabin. Jeffrey loved the cabin, with the peace of nature and an inviting pond just outside his door. He is preceded in death by his parents; his grandparents, George P. and Jewel Hennessy, and John and Helen Mae Green; and his nephew Kalon Stewart. He is also survived by his two sons, Josh McGaugh and Stewart Hennessy, both of Magnolia; sister Susan (Jay) Henard of Waldo, AR, brother Jody (Sondra) Hennessy of Vidor, TX; grandchildren, Joshua and Jada McGaugh, their mother, Que, and her daughter Shay Ware. Survivors also include his brother-in-law John Ed (Melinda) Stewart, Jr., sisters-in-law, Rene (Lawrence) Folse, and Roxane Stewart, all of Magnolia, as well as nieces and nephews, Jerome (Katie Beth) Davis, Brock Davis, Lance (Sarah) Folse, Parker Dunn, Jordan Dunn, John (Maegan) Hennessy, Karen (Jeff) Meier, Mandy Patrick, Jennifer Landry, and Heather (Kevin) Barker, as well as a host of other family members, friends and colleagues. A private graveside service will be held on Sunday, March 29, at Shiloh Cemetery with Dr. Eric Goble officiating, under the direction of Lewis Funeral Home. Viewing and signing of the guest book will be available from 1 – 5pm on Saturday, March 28 at the funeral home. However, due to COVID-19 social distancing rules, the family will not be present. In lieu of flowers, memorials may be made to the Magnolia Regional Medical Center Foundation.

Jeffrey G. Hennessy, 64, a lifelong resident of Magnolia, AR, died unexpectedly March 26, 2020, in Lafayette County, AR, due to an industrial accident. Jeffrey was born in Magnolia on April 13, 1955 to the late Jesse Preston and Dorothy... View Obituary & Service Information

The family of Jeffrey Green Hennessy created this Life Tributes page to make it easy to share your memories.

Send flowers to the Hennessy family.