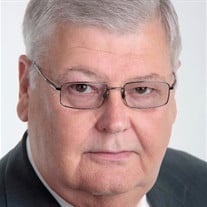 Joe Samuel Mullins, 74 of Emerson, Arkansas passed away on Friday, January 31, 2020 at Wentworth Place in Magnolia. He was born on March 6, 1945 in Magnolia to the late Edmon and Audie (Nesbit) Mullins. Joe was a devoted husband of 53 years and a proud father to four daughters. He was well known as a public servant in his community and well respected for his many accomplishments that provided a better quality of life for many citizens. He was honored to serve terms as Columbia County Judge, Mayor of Emerson, and Justice of the Peace. Joe was an El Karubah Shriner, which helped others with charity and community services. He made lifelong friends through his membership. His compassion for helping people allowed him to be an advocate for numerous children in Columbia County to get accepted into the Shriner’s Hospital for Children with orthopedic and burn conditions at no expense to the families. Later in life, Joe discovered a passion for acting. He held a Screen Actors Gild card and was cast in 49 movies including Secretariat, True Bloods, and W. He also can be seen in many Hallmark movies and even a few commercials. Joe was also an active member of the Rotary Club of Magnolia, the Columbia County Amateur Radio Club (N5PNB) and he was also co-founder of the Purplehull Pea Festival. The family would like to thank Charlotte Reliford for all of her many nights of talking, praying and laughing with him. Also, a special thank you to Kim Saunders for the many miles traveled for helping with his care. Joe is survived by his wife Linda Mullins of Emerson; four daughters, Della Wooley of Emerson, Anita Burleson and husband Chad of Emerson, Angela Murphy and husband Brad of Jonesboro, Arkansas, and Ellie Baker and husband Scott of Emerson; eight grandchildren, Cody Wooley and wife Gretchen of Magnolia, Cally Wooley of Conway, Landi Burleson and Chloe Burleson of Emerson, Zack Murphy and Owen Murphy of Jonesboro, and Ireland Baker and Smith Baker of Emerson; one great grandchild Piper Wooley; his mother in law, Doris Waller of Magnolia; and a host of extended family and friends. Funeral services will be held at 3:00 PM on Sunday, February 2, 2020 at First Baptist Church with Bro. David Watkins and Rev. Barbara Lewis officiating. Burial will follow at Magnolia City Cemetery under the direction of Lewis Funeral Home, Inc. Visitation with the family will be Saturday evening from 5:00 to 7:00 PM at the funeral home. In lieu of flowers memorials may be made to Shriner’s Children’s Hospital in Shreveport, Louisiana. Pallbearers will be Cody Wooley, Zack Murphy, Owen Murphy, Mike Waller, Jamie Waller, and Ricky Wilson. To sign the online guestbook or share a memory visit www.lewisfuneralhome.biz

Joe Samuel Mullins, 74 of Emerson, Arkansas passed away on Friday, January 31, 2020 at Wentworth Place in Magnolia. He was born on March 6, 1945 in Magnolia to the late Edmon and Audie (Nesbit) Mullins. Joe was a devoted husband of 53 years... View Obituary & Service Information

The family of Joe Samuel Mullins created this Life Tributes page to make it easy to share your memories.

Joe Samuel Mullins, 74 of Emerson, Arkansas passed away on Friday,...

Send flowers to the Mullins family.