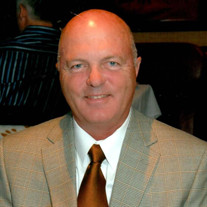 John Dixon Boreing, 66, of Magnolia, AR passed away Tuesday, June 19, 2018 at the Arkansas Heart Hospital in Little Rock, AR. He was born on January 13, 1952 to the late Tommye Graves Boreing and Charles Doak Broeing. John was self-employed, carrying on the family business, Boreing Water Well. He was an avid motorcycle enthusiast and sometimes an avid hunter and fisherman. He was a lifetime member of the American Motorcycle Association, Arkansas Dirtriders, and the Iron Butt Association. His greatest joy was supporting his sons and now grandchildren in whatever activity they were involved in. He was fondly known as “Pop” to his grandchildren. John was a lifelong member of the First United Methodist Church. He is survived by his wife of 46 years, Mary Alice Boreing; two sons, Brad and wife Dana of Fayetteville, AR and Clay and wife Tara of Magnolia, AR; four grandchildren, Rhett and Jax Tidwell of Fayetteville, AR and Jax and Clara Boreing of Magnolia, AR; brothers, Doak Boreing of Hot Springs, AR and Tim Boreing of Lake Charles, LA; sister Mandy Dillard and husband Bill of Little Rock, AR; and a host of nieces, nephews, and wonderful friends. Funeral services will be held at 10:00 AM on Friday, June 22, 2018 at the First United Methodist Church with Dr. Eric Goble officiating. Burial will follow at the Magnolia City Cemetery under the direction of Lewis Funeral Home, Inc. of Magnolia, AR. Family visitation will be Thursday evening from 6:00 to 8:00 PM at the funeral home. Pallbearers will be Jay Elliot, Joe Roberson, Jeff Pinnell, Robert Colquitt, Tim Griffin, and Pat Antoon. The family requests memorial donations are sent to First United Methodist Church, 320 West Main Street, Magnolia, AR 71753 or to the charity of the donor’s choice. To sign the online guestbook or share a memory visit www.lewisfuneralhome.biz

The family of John Dixon Boreing created this Life Tributes page to make it easy to share your memories.

Send flowers to the Boreing family.