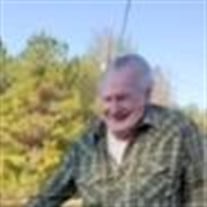 John Arthur Garrett was born, February 25, 1940, to Eddie Mae Reardon Garrett and Martin Garrett in Haynesville, LA. He was preceded in death by his wife Judy Rowe Garrett, son in law Albert "Al" Burkhalter Jr, brother Martin Alford Garrett, mother Eddie Mae Totsie Garrett Hines, grandma Ella Ann Reardon, step father Newton W. Hines, grandmother Mary McKinnon Garrett, and grandfather John Garrett. He is survived by his only daughter Sheila Ann Garrett Burkhalter, two grandchildren, Garrett Cody Burkhalter and Shelby Paige Burkhalter. He cared for Sheila, Youngun as he called her. They hunted and fished, taught her to bow hunt and shoot all at a very young age. He so loved and cared for Garrett and Shelby. He fondly called Garrett, Mr. Garrett since birth and rolled on into his adult years. He fondly called Shelby, Miss Priss since birth and thereafter into her adult years it became Youngun. He lived in Haynesville with his MaMa and brother raised by his grandma Ella Ann Reardon. He learned to work hard at young age. After his chores were done just before sundown his Grandma would tell him to shoot some quails for supper...his start to hunting began. His MaMa remarried and they moved to L C Wise/Pisgah Community in AR, just across the state line. He went to school in Emerson for a short time. Worked in the fields for his stepfather. Baled hay for farmers in the community. He and Buddy Cochran joined the Navy. John hitched hiked from CA to AR catching a bus when he could and returned back home to the fields worked by day and by night, he worked the local county fairs as a Rodeo Clown fighting bulls, the money was good. He bought a 1962 Ford Galaxy, midnight blue in color. He then started working oilfield. In 1963 he married Judy and had their only child Sheila. In 1969 he was working at LAAP while living in AR taking care of cows and chickens after his stepfather passed away and while his MaMa furthered her education. He then moved his family to Minden, LA where he continued oilfield work and working offshore. In about 1973 Donald Wynn got him a job at Schlumberger in Bossier City, LA and continued to work with them until they split and became Johnston-Macco Testers Schlumberger where he retired about 1983. John then leased out two hotshot trucks to Ace under Betty Evans in Bossier City, LA until 1997. In 1997 he moved back home to AR. Shortly after his move back, he started work for James Bayou checking wells in the surrounding areas. He has been long since retired from working. John always tried to keep busy never could be idle for too long. Between working in his younger years, he always found time to hunt, making his own arrows and for Sheila so she could shoot. He always had guns and he taught his daughter at a young age to respect them and shoot them. He made knives. He always had a sharp knife on him, he had stones and knew how to sharpen them. There would always be extra knives at the house because his friends or coworkers wanted their knives sharpened correctly. He would make his own fishing lures. He was a man that was smart in the books and well innovated before his time. Wise soul he was...all you had to do was take the time to truly listen to him and you would have come away with some kind of wisdom. A man of few words but you could always take him at his word. Our Daddy, PaPa, Pops, Pop and Boy Friend as some of us so fondly called him will miss him...but our memories will be forever etched in our hearts and minds...he was the kind of man you will always remember. To honor John a memorial service with military honors will be held at 10:00 am, Saturday, October 9, 2021, in his garden at his home in Emerson, Arkansas. The family will be honoring John with his wishes, by planting an oak tree in his garden with his ashes so that he may become one with the tree and nature. John knew Jesus as his Savior, so we all know where he lies and where he lives. Honorary pallbearers will be Byron Marlar, Mary Buffington, Shane Rayborn, Randall Johnson, and Jennifer Davison. To sign the online guest book or share a memory visit www.lewisfuneralhome.biz

The family of John Arthur Garrett created this Life Tributes page to make it easy to share your memories.

Send flowers to the Garrett family.