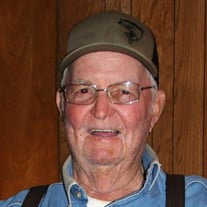 John Wallace Perry was born to Ruby Wallace Perry and Tollie Perry in Harlingen, Texas, on September 29, 1938 and passed away on March 3, 2019 at Summit Health and Rehabilitation Center. The family soon moved to Taylor, Arkansas, where he later graduated high school. John had a long career as a cattleman buying, selling, and trading cattle for the Magnolia Livestock Auction as well as for many of his friends. John later began working at Albemarle Corporation and retired after a lengthy career. He was happiest when spending time in the pasture, barn, or hayfield. John would spend hours “checking his cows” and helping his many friends and neighbors. Like on any farm, there was always something that needed attention. John was able to fix, patch, or repair almost anything. His family has always been his pride and joy. If you were with him long, you were bound to hear a story about his children or grandchildren, a fish story, or just a plain old story. Despite his busy schedule, he happily traveled many miles over the years to watch his children and grandsons many activities and sporting events. This also included High School and College Graduations. John never met a stranger and was always quick with a smile and a joke. He was preceded in death by his parents, and brother Jeff Keith. He is survived by his wife, Marilyn Keith Perry of the Sharman Community, son Keith Perry of Little Rock, daughter Karen Perry Mushinski; son-in-law Allen Mushinski, grandsons Austin, Parker and Connor Mushinski of Argyle, Texas; sister Juanita Casey of Magnolia; nieces and a nephew The family wishes to thank the wonderful staff at Magnolia Hospital, Summit Health and Rehab in Taylor, Encompass Hospice and "The Girls" for their loving care. A celebration of life service will be held at 10:00 am on Tuesday, March 5, 2019 at Unity United Methodist Church with Rev. Wayne Edwards, William Smith, Raymond Robertson, Johnny Hicks, and Allen Mushinski officiating. Burial will follow at Sharman Cemetery under the direction of Lewis Funeral Home, Inc. Visitation with the family will be Monday evening from 6:00 to 8:00 pm at the funeral home. Pallbearers will be Bruce Hoyle, Scott Hoyle, Adam Camp, Bart Emerson, Parker Mushinski, Connor Mushinski, Austin Mushinski, and Brady Broom. Honorary pallbearers will be Joe Hoyle, Bobby Emerson, John Jack, Scotty Jack, Donald Keith Pearson, Wayne Griffeth, Donny Camp, Larry Thornton, Harold Lloyd Johnson, and Brannon Collier. To sign the online guest book or share a memory visit www.lewisfuneralhome.biz .

John Wallace Perry was born to Ruby Wallace Perry and Tollie Perry in Harlingen, Texas, on September 29, 1938 and passed away on March 3, 2019 at Summit Health and Rehabilitation Center. The family soon moved to Taylor, Arkansas, where... View Obituary & Service Information

The family of John Wallace Perry created this Life Tributes page to make it easy to share your memories.

Send flowers to the Perry family.