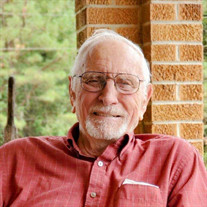 Julious Walter Elmore, 96 of Magnolia, passed away July 15, 2021 at home surrounded by his family, whom loved him dearly. He was born May 7, 1925 in Magnolia. He was raised on a small cotton farm, 7 miles south of Magnolia. He spent four days at Camp Robinson, Arkansas and moved by troop train to a signal corps camp near Sacramento, California called Camp Kohler. He scored relatively high on the general aptitude test, then after basic training, was selected and cleared by the FBI for top secret code room work as a cryptographic technician. He served overseas in New Guinea, Bial Islands and the Philippine Islands for 2 ½ years from 1943 -1946. Mr. Elmore was a bricklayer for over 70 years after marrying and raising five children. After retiring, he loved to garden and spend time outside. He loved to read and enjoyed history, where he wrote “Stories of the Wracken Sacker” published in 2013 that details information of the Civil War and his grandfather’s service. The loves of his life were his grandkids and great-grandkids. He is a lifelong member of Philadelphia United Methodist Church where he served on all committees and was presently historian. He is a lifetime member of the Sons of Confederate Veterans. He is a World War II Army veteran Sergeant, and a Real Grandson. He was preceded in death by parents, Wordie Octavious Elmore and Vernenia Pauline Thomas Elmore, first wife Kathleen Faye Pearce Elmore, granddaughter, April Michelle Neason and second wife, Jackie Ruth Hunter Elmore and brother, Lee Roy Elmore of Magnolia. Survivors include sons, William Elmore, Marshall Elmore and wife Becky, daughters, Mary Lewis and husband Curtis, Katie Neason and husband Johnny, Nancy Cook and husband Greg all of Magnolia. He was survived by two step-sons, Paul Hunter and wife Sherry of Camden and Mark Hunter of Magnolia. He is survived by a sister, Altamae Kirkpatrick of Magnolia and grandchildren Ronnie Lewis and wife Kim of Camden, Melissa Lewis, Wendy McWilliams and husband Steven, Johnny Neason and wife Jessica, Lindsey Cook, Josh Cook, of Magnolia, Seth Cook of Little Rock, Megann Neill and husband Brad of Magnolia and Holly Elmore of Hot Springs. Great grandchildren Bradon McWilliams of Magnolia, Zane McWilliams, Ava McWilliams of Magnolia, Johnathan Neason of Springhill, LA, Rachel Cates Neason of Cabot, Caleb Lewis and Cameron Lewis of Camden, Hayden Cook, Lilly Lee, Khloe Neason of Magnolia, Brittany Bacon of Fayetteville and Victoria Green of Atlanta, GA. Memorial services will be held at 11:00 am at Philadelphia United Methodist Church with visitation before the service at 10:30 with Pastor Carol Moore officiating with assistance from retired Pastor Wayne Edwards. Mr. Elmore’s grandsons will serve as pallbearers. Graveside services will include Military Honors. In lieu of flowers memorials may be made to Philadelphia Cemetery Fund, or Philadelphia United Methodist Church, C/O William Powell, 420 Columbia Road 211, Magnolia, Arkansas. Special thanks to Encompass Hospice and nurses Megan Smith and Rosalind Thomas. A very special thank you to Demita Martin “Our Angel.” To sign the online guestbook or share a memory visit www.lewisfuneralhom.biz

Julious Walter Elmore, 96 of Magnolia, passed away July 15, 2021 at home surrounded by his family, whom loved him dearly. He was born May 7, 1925 in Magnolia. He was raised on a small cotton farm, 7 miles south of Magnolia. He... View Obituary & Service Information

The family of Julious Elmore created this Life Tributes page to make it easy to share your memories.

Send flowers to the Elmore family.