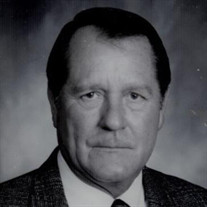 Kelly Michael (Mike) Lewis, 77 of Magnolia, Arkansas, passed away on Saturday, April 11, 2020, at John R. Williamson Hospice House in El Dorado. He was preceded in death by his parents, Kelly Ben and Bobbye (Bussey) Lewis; and four- legged buddies Doodle, Quincy, and Bobo. Mike was born on November 3, 1942, in Magnolia, Arkansas, and was a 1960 graduate of Magnolia High School and attended Southern State College. He played trumpet in both school bands, and later used his talent by participating in community musical events. He was a member of Central Baptist Church and enjoyed fishing, hunting, and golfing. Known as Grandy, he loved his grandchildren and planned special activities for their enjoyment during each visit. Mike was Product Manager for Scaffolding and Acoustical at Alumax Corporation. He served the community as a Magnolia City Councilman, Ward 3, for 13 years; Magnolia Economic Development Corporation president from 2004-2011; a volunteer fireman for 20 years with the Magnolia Fire Department; and a volunteer at the Stew Pot. He is survived by his wife of fifty-nine years, Nancy Elliott Lewis of Magnolia; son Mark Lewis and wife Kimberly, granddaughter Jenna Michelle Lewis and grandson Connor Thomas Lewis, all of Conway; sister-in-law Peggy Byrd (James); niece Mandy Collins (Chris); nephews Shannon Richards (Christie) and Courtney Byrd (Kelly); cousins Melba Keith (William) and Neva Baker (Buddy); many close friends; and exceptional friends Allen Pinner, Larry Talley, and Mike Waters. Due to COVID-19 a public viewing will not be held; however, a guestbook signing will be available on Tuesday, April 14th from 10 AM to 4 PM under the covered drive at Lewis Funeral Home, Inc. For your safety please provide your own pen. A graveside service will be held at 2:00 PM on Wednesday, April 15, 2020, at Arlington Cemetery in El Dorado, Arkansas, with Dr. Michael Seabaugh officiating under the direction of Lewis Funeral Home, Inc. in Magnolia. In lieu of flowers, memorials may be made to the Legacy Fund at Central Baptist Church, 207 West Union Street, Magnolia, Arkansas 71753 or Columbia County Animal Protection Society (CCAPS) PO Box 2003, Magnolia, Arkansas 71754. To sign the online guestbook or share a memory visit www.lewisfuneralhome.biz

The family of Kelly Michael Lewis created this Life Tributes page to make it easy to share your memories.

Send flowers to the Lewis family.