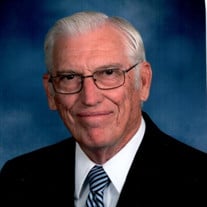 Felix “Lamar” Lee, 81, of Magnolia, Arkansas died Sunday, February 13, 2022 at the Cornerstone Specialty Hospital in Bossier City, Louisiana, surrounded by his loving wife, Peggy and his four daughters and sons-in- law. Born at home in Magnolia on September 21, 1940, he was the only child of Chester and Lorene (McDaniel) Lee, who preceded him in death, as did a grandson, Lucas Lee Ussery. A faithful member of College View Baptist Church, he served as a deacon, treasurer, and teacher for the Adult 1 Sunday School class, as well as serving in any capacity as needed over the years. He accepted Jesus into his heart as a teenager while hearing his mother pray for his soul to be saved. Like his father, he lived a life that pointed others to Jesus. He prayed unceasingly for his girls, sons-in-law, grand and great-grandchildren and for all those God laid on his heart. He enjoyed his early morning Bible study time and would end it by slipping to his knees to pray. He shared what he learned to his class, but also to his family especially on holidays when they would be together. He shared his heart with them in devotionals and words of wisdom he had learned. December 26, 2021 was his last time to share with the 30 family members present. Even the little ones listened quietly to his words. It will remain a treasured memory for them. Through his example at home, at work with David Spradlin and Bill Merritt and the Liberty Supply families and customers in Magnolia and El Dorado or with Gary and Kay Davis, Columbia Oil, and the joys and tribulations of the oilfield, or serving at church or handing out Gideon bibles in the rain at SAU to the new students, or taking the kids for rides in the Corvettes for ice cream or riding them in the big tractors, he taught his girls and their families the meaning of integrity, work ethic, giving and gratitude for all that God had given them. He loved to travel with Peggy and usually two or three of the daughters and grandchildren. They visited almost all the states and into Canada and several countries overseas including Ireland, Italy, France, Spain, Austria, and Israel. The family wishes to thank Bro. Paul Bullock, all the doctors, nurses, and friends who cared for Lamar especially during his last days. He was very appreciative of the calls and prayers offered on his and his family’s behalf. A life well lived, he leaves a legacy of character and faith. Although he is greatly missed already, the family was comforted in knowing that he simply took his last breath on earth and his next breath in heaven. He is preceded in death by his parents and a grandson Lucas Lee Ussery. Lamar is survived by his wife Peggy Lee of Magnolia; daughters Carole Yates (Jimmy), Lisa Perry (David), Ann Baker (Allan), Amy Ussery (Jody) all of Magnolia; grandchildren Eric Yates (Christie) of Asheville, North Carolina, Dianne (Sean) Williams of Magnolia, Kaila (Henry) Disharoon of El Dorado, Jessica Yates of Seattle, Washington, Colton Kirkpatrick of Frisco, Texas, Kaisi Ochs (Ryland) of Magnolia, Rachel Ussery of Savannah, Georgia, Anna Ussery of College Station, Texas, and Tanner West of Star City; great grandchildren Elizabeth Brown, Kourtney Williams, and Rebecca Williams of Magnolia, Samuel Yates and Levi Yates of Asheville, North Carolina, Vance Triplet and Hardy Disharoon of El Dorado; aunt Flo McDaniel of Palm Coast, Florida; a host of nephews, nieces, cousins, and friends. Funeral services will be held on Saturday, February 19, 2022 at 2:00 p.m. at the College View Baptist Church with Bro. Paul Bullock officiating. Burial will follow at the Antioch East Cemetery under the direction of Lewis Funeral Home, Inc. in Magnolia. Visitation will be Friday, February 18 from 5:00 to 7:00 p.m. at the funeral home. Pallbearers will be Kelly Basinger, Keynon Basinger, Scott Bennett, Donald Bradfield, Dennis Minor, and Jorge Ciurcina. Honorary pallbearers will be his grandsons Eric Yates, Colton Kirkpatrick, and Tanner West. Memorial donations may be made to The Gideons International, PO Box 945, Magnolia, AR 71754 or College View Baptist Church, 2121 North Washington, Magnolia, AR 71753. To sign the online guest book or to share a memory visit www.lewisfuneralhome.biz

The family of Lamar Lee created this Life Tributes page to make it easy to share your memories.

Send flowers to the Lee family.