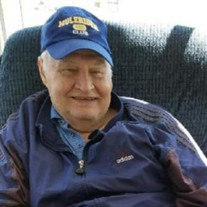 Larry McNeal of Waldo died June 17, 2021 at Life Touch Hospice in El Dorado, Arkansas. Larry was born Feb 29, 1940 at home in Paris, Arkansas to Bernice and Glenn O. McNeal. Larry was a retired professor at Southern Arkansas University in Magnolia, Arkansas. His brother, Glenn O. McNeal Jr, his sister Gayle Garner and her husband Larry Garner, his sister-in-law Ann Sessoms, and his nephew Danny McNeal preceded him in death. His beloved wife Judy, son Mark and his wife Debbie of Parker, Colorado, daughter Christy Gray and her husband Steve, his brother David McNeal and wife Alice of Covington, Louisiana, his sister-in-law Cherie McNeal of Arab, Alabama, and six grandchildren and four great-grandchildren survive him. Larry graduated 10th in his senior class of 70 from Paris Arkansas Public Schools in 1958, and was selected to play in the 3rd Annual Arkansas All-Star football game and started at offensive guard. He received a football scholarship from Southern State College where he met and married Judy Sessoms in 1960. He played football at SSC for four years and was co-captain of the football team and a first-team All-Conference player for his junior and senior seasons. He was inducted into the Southern Arkansas University Sports Hall of Fame in 2017. Larry was also a member of the Alpha Chi National Honor Society. Upon graduation, Larry and Judy moved to Camden, Arkansas where Larry taught and coached for two years before receiving a teaching apprenticeship from Auburn University. His Camden Junior High track team won District championships both years and finished third in the state in 1963, and were State champions in 1964. Larry received a teaching assistantship to Auburn University and graduated with a Master’s degree in 1965. He signed a contract as instructor of Health and Physical Education with Southern State College in 1965, and was assigned to be Director of Intramural Sports. Over the years, Larry developed the Intramural program from just eight activities to over fifty. In 1968, Larry and his family moved to Sanger, Texas and spent a year in residence at North Texas State before returning to SSC. Larry received his Doctorate from NTSU in 1971. Larry transitioned to Administration in 1981, serving as Director of Continuing Education and Administrative Assistant to the Academic Vice-President. He inherited a summer youth program consisting of only swimming lessons and expanded the program to include children’s theater, art, music, math games, “mad scientist” lab, and other youth activities which enrolled over 1,000 participants each summer. Larry returned to his first love (classroom teaching) in 1984, and served in the College of Education until his retirement in 2000. The University recognized Larry for his contributions by being named the 1992 Honor Professor, the recipient of the 1997 Calvin Wetzig Excellent in Teaching Award, the 1998 Outstanding Service Award, and the 2004 Lifetime Achievement Award from the SAU Alumni Association. Larry headed a national accreditation effort for the School of Education in 1988 that resulted in the program being moved from probationary status to full accreditation status, passing 20 out of 20 standards. Larry was also honored as Waldo Citizen of the Year in 1994 after initiating a community needs assessment for a Headstart program in Waldo, which lead to the first Headstart program in that community. After 35 years of full-time teaching, Larry served as a part-time advisor in the SAU Advising Center for the next 15 years where he enjoyed helping the students work out their schedules and degree plans. Larry also started a monthly gathering of retired faculty and staff which he dubbed “the dinosaurs”. His last request to his wife was “Don’t bury me in a neck tie. I hate neck ties.” A graveside services will be held at 2:00 PM on Sunday, June 20, 2021 at Marysville Cemetery with Bro. Elvis Griffin officiating under the direction of Lewis Funeral Home, Inc. To sign the online guestbook or share a memory visit www.lewisfuneralhome.biz

The family of Larry McNeal created this Life Tributes page to make it easy to share your memories.

Send flowers to the McNeal family.