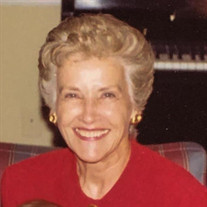 Letha Brown Davis “Lee” died at home on the evening of Wednesday, September 15, 2021. Mrs. Davis was born September 4, 1923 in Jasper County, Illinois. She grew up in Ingraham, Illinois, the second daughter of Angie Kepley and Howard Ross Brown. Her parents instilled in her a great love for the Lord and a desire for lifelong learning. She was educated at Ingraham Elementary School, Clay City, Illinois High School. She studied at Hunter College in New York as well as Southern Arkansas University, and attended LifeQuest in Little Rock faithfully well into her 90’s. During World War II, Lee joined the United States Navy as a WAVE and served in Naval Intelligence. She was stationed in Washington D.C. and was married in the Naval Chapel to Colen Grady “Betsy” Davis on October 14, 1945. Her husband adored her for 42 years until his death in 1988. After moving a few times, they made their home in Magnolia, Arkansas in 1955. In Magnolia, their family found great friends, an active community, and a church they loved, Central Baptist. Lee moved to Little Rock, Arkansas in 1996 and made a host of good friends and soon fell in love with a new church, First United Methodist, and life in “the city”. She was always on the go and loved a full calendar. She was a fabulous bridge player, a voracious reader, a world traveler, was very witty, and told great stories! Lee is survived by her son, Mike Davis and his wife, Rita, of Magnolia, Arkansas and her daughter, Pat Dodson and her husband, Mac, of Little Rock, Arkansas. Also, she is survived by Joe Davis and his wife, Carolyn, of The Woodlands, Texas and Jim Davis and his wife, Patti, of Warren, Arkansas. She leaves nine grandchildren: Kristan Curzan, Betsy Davis, Brant Davis and wife, Shannon, Hannah Davis, Kari Lamkin and husband, Troy, Katherine Pesses and husband, Joey, Davis Dodson and his wife, Sarah, Laura Ritchie and husband, Jimmy, Grace McAllister and husband, Mac, 11 great grandchildren, and beloved niece and nephew, Val Foust and Bill Foust. Pallbearers are Joey Pesses, Troy Lamkin, Davis Dodson, Jimmy Ritchie, Roger Smith, and Mac Dodson. Honorary pallbearer Dr. John Jones. There will be a graveside service with Military Honors on Monday, September 20th at 2 o’clock at Memorial Park Cemetery in Magnolia, Arkansas. Michael Launius will be officiating the service. A reception will follow at the home of Rita and Mike Davis, 759 Columbia Road, 47 in Magnolia. Memorials may be made to First United Methodist Church of Little Rock, 723 Center Street, Little Rock, AR. 72201 or Arkansas Museum of Fine Arts, 2510 Cantrell Rd. Little Rock, AR. 72202. Arrangements are under the direction of RuebelFuneralHome.com and Lewis Funeral Home.

Letha Brown Davis &#8220;Lee&#8221; died at home on the evening of Wednesday, September 15, 2021. Mrs. Davis was born September 4, 1923 in Jasper County, Illinois. She grew up in Ingraham, Illinois, the second daughter of Angie Kepley and Howard... View Obituary & Service Information

The family of Letha Brown Davis created this Life Tributes page to make it easy to share your memories.

Letha Brown Davis “Lee” died at home on the evening of Wednesday,...

Send flowers to the Davis family.