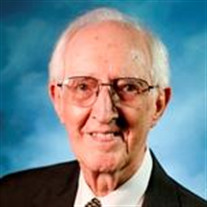 Louis Johnson Blanchard, of Magnolia, loving and beloved husband, father, grandfather, uncle and friend, passed away May 4, 2019 after a courageous battle with non-Hodgkin’s lymphoma. Blanchard is a World War II Veteran, serving in the Air Force providing meteorological support for both the European (Germany) and Pacific war fronts. He provided air weather guidance to support Air Force missions including safe routing for tactical offensive missions and reconnaissance missions that gathered, analyzed, and reported intelligence to mission planners. After serving his country, he graduated from Northwest Mississippi Community College with an Associates of Arts degree. He received his BBA in 1953 and MBA in accounting in 1954 both from the University of Mississippi and was then employed by Price Waterhouse CPA firm in Houston, Texas. In 1956 he accepted a faculty position at Southern Arkansas University (then Southern State College) and shortly afterwards he became a Certified Public Accountant. While taking his real world experience to the classroom, Blanchard discovered his passion for university life and inspiring young business students. He set a high bar academically yet his personal interest in his students was felt by many at SAU which then fostered numerous long-standing relationships. Very few places that he traveled later in life did he fail to encounter and recognize a former student. His legacy of kindness, gentlemanliness, and statesmanship has set an example for many. Blanchard served as Chairman of the Department of Accounting, retiring in 1998 after teaching 42 years in the School of Business. Friends and alumni established The Louis J. Blanchard Endowed Scholarship at SAU in 1985 and the fully-endowed Louis J. Blanchard Professorship in Accounting in 1999; in 1989 he was selected by SAU faculty peers as Honor Professor and in 2001 received the distinguished title of Professor Emeritus. Blanchard served as President of the SAU Foundation and as Interim President of SAU in 2001. In addition, he has served on the SAU Board of Trustees, the SAU Foundation Board of Governors and the Mulerider Club Advisory Board. He served as the SAU faculty athletic representative for 33 years. In 2017 SAU and the SAU Foundation honored Martha and Louis by naming the SAU business building Blanchard Hall. The Arkansas Society of CPA’s presented Blanchard with the Lifetime Achievement in Accounting Award in 1998 and he was named Educator of the Year by the Arkansas Society of Public Accountants. In 2000 Blanchard was recognized as distinguished alumnus by Northwest Mississippi Community College and has served on their Foundation Board; he was a member of the Columbia County Unit of Arkansas Retired Teachers Association and served as President from 2002 – 2004. Blanchard was a member of Central Baptist Church where he served as a deacon, frequent committee member and was involved whenever the church family got together. He was a member of the Lions club for 62 years, serving in nearly every organizational position. He connected with the people in the organizations he joined through his volunteerism and giving back to his beloved city of Magnolia. Blanchard was born January 12, 1928 in Senatobia, Mississippi to Carl Herschal and Mattie Sue Johnson Blanchard. He leaves behind his wife of 67 years, Martha Jones Blanchard, daughters Gail Michels (Ken) of Parkville, MO and Alice Thomas (Mark) of Rockville, MD and granddaughters Alexia Follingstad (David) of San Antonio, TX and Tricia Thomas of Parkville, MO, as well as numerous nieces, nephews and cousins. He was preceded in death by his parents, his sister Mary Lucretia, brothers James Carlton and Jack Osborne. Special thanks to the staff of Southern Caregivers, Lifetouch Hospice and Dudneywood who provided loving and compassionate care for him and his family. Funeral services will be held at 2 p.m. Thursday, May 9, 2019, at Central Baptist Church with Bro. Steve Ford officiating. Burial with Military Funeral Honors will follow at Memorial Park Cemetery, under the direction of Lewis Funeral Home, Inc. in Magnolia, AR. Visitation will be Wednesday, May 8, 2019, 5 -7 p.m. at Lewis Funeral Home. Pallbearers are David Ashby, Corbitt Lambkin, Joel Reeves, Mark Trout, Ronnie Watson and Tim Wise. Honorary Pallbearers are the Lions Club, the SAU Dinosaurs, and the Deacons of Central Baptist Church. In lieu of flowers the family requests memorial donations may be sent to Central Baptist Church, 207 W. Union St, Magnolia, AR 71753, or to the SAU Foundation, 100 E. University, MSC 9174, Magnolia, AR 71753.

The family of Louis Johnson Blanchard created this Life Tributes page to make it easy to share your memories.

Send flowers to the Blanchard family.