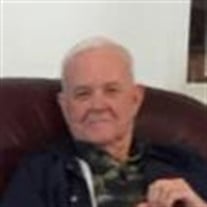 Malcolm Bridges, fondly known as “Mack”, left this earth to enter his eternal home on Saturday, January 29, 2022, at the John L. Williamson Hospice House in Eldorado, AR, following a brief illness. He was born, July 8, 1936, in Magnolia, Arkansas to the late Sanders Malcolm Bridges and Olga Lee (Bryan) Bridges. Mack is also preceded in death by three infant sons, Bobby Wayne, Malcolm Lee, Jr., and Timothy Lee Bridges, great granddaughter Falynn Sloane Fort, and his mother and father in law Naomi and John Hendricks. Left to cherish his memory are his wife Laura Bridges of Willisville, AR; his three children, Mark Bridges and wife Karen, Nina Allen and husband Steve, Brent Waters and wife Jodi; a sister Ann Bridges; sister in law Melba Britt and husband Richard all of Magnolia, AR; grandchildren, Lindsy Fort of Magnolia, Jacob Jaggers and wife Kelsi of Waldron, AR, Kelly Bridges, Kimberly Bridges, and Connor Waters all of Magnolia; great grandchildren, McKenzie Jaggers, Holden Jaggers, and Everett Jaggers of Waldron, AR, and Landry Fort and Sloane Fort of Magnolia. Malcolm proudly served his country in the United States Army from 1959 to 1965 attached to Battalion 54 after the Korean Conflict and the beginning of the Vietnam War. He worked for Southern Extrusions, then began his career with Albemarle, (formerly Ethyl), where he retired in 2001. He enjoyed his garden every year and could daily be seen at ‘The Coffee Shop” with his friends in Willisville. He served as the Fire Chief in Willisville for a few years and served on the Nevada School Board as well. He loved watching those Bluejays play. He loved his wife, children, grandchildren, and great-grandchildren dearly. But most of all, he loved His Jesus!! He never missed an opportunity to ask someone if they knew Christ. If they didn’t, he was going to make sure they knew. You cannot imagine how many lives he touched with those simple but powerful words, “Do you know Jesus?” Funeral services will be held at 10:00 am on Tuesday, February 1, 2022, at Lewis Funeral Home Chapel with Bro. Richard Britt and Dr. Eric Goble officiating. Burial will follow at Barlow Cemetery. Visitation with the family will be Monday evening from 6:00 to 8:00 PM at the funeral home. Pallbearers will be Steve Allen, Jacob Jaggers, Rickey Bridges, Conner Waters, James Crisp, and Mike Harwell. Memorial donations may be made to Trinity Baptist Church, PO Box 1213, Magnolia, Arkansas 71753 He was a loving Father, Brother, Grandfather, and friend. He will be deeply missed by them all. What a gigantic void his absence already brings, but may we rejoice in knowing that he is now with “his Jesus”. The Family would like to thank the staff of Southern Caregivers for the care he received over the last few months. The Family also extends a special Thank you to the staff at Life Touch Hospice in these last days. The kindness shown will never be forgotten. John 3:16 For God so Loved the world that He gave His only begotten Son, that whosoever believeth in Him should not perish, but have Everlasting Life.

The family of Malcolm Lee Bridges created this Life Tributes page to make it easy to share your memories.