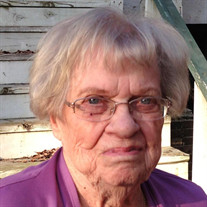 Mary Elizabeth Warnock Harsh passed away in her home on May 13, 2021 surrounded by her family and a host of beautiful flowers. Mary was a native and lifetime Magnolian born January 28, 1922 to the late Nina Grayson Warnock and Robert Samuel Warnock, Jr. She graduated from Magnolia High School in 1939 and attended Stephens College in Columbia, MO before graduating in 1943 from the University of Arkansas where she was a member of Pi Beta Phi sorority. Mary married Army Air Corps Major John W. Harsh on April 2, 1944. For all of her adult life she gave generously of her time and talents to benefit others. She was a member of the Jackson Street Church of Christ since 1933. In 1951, she and her mother helped charter Chapter AN of the P.E.O. Sisterhood. She remained a dedicated member for 70 years, serving the chapter as an active committee member and as president. In December 1946, she became a charter member of Magnolia Junior Charity League and served as its first president. She was a dedicated Girl Scout volunteer and on the Conifer Council Board. She supported public education through her leadership in the local PTA and as its president. She was a member of the Order of Eastern Star. As a Verbie Graney Center board member, Mary advocated for special needs young people in Columbia County. Mary was elected to three 3-year terms on the Southern Arkansas University Foundation, Inc. Board of Governors and received the Mulerider Award, the University’s highest recognition for philanthropic giving. During John’s tenure as mayor from 1957 to 1966, she was Magnolia’s First Lady. More recently she served on the Columbia County Courthouse Restoration Committee and became a charter member of Columbia County Community Foundation. Mary taught in the Magnolia Public Schools at a time when lady teachers were forbidden to wear slacks to school. After a district wide memo mentioning long pants (as opposed to short ones) was circulated, Mary became the first to test the waters. Female Magnolia teachers were soon wearing slacks to school. She served on the board of Magnolia Bank Corporation, as a Director of Columbia Land and Timber Co., and as president of Farmer's Real Estate Company. When not working on community or business projects, Mary traveled the world with friends and family. She was an avid, lifetime reader, preferably historical, and enjoyed playing bridge with her girlfriends, both socially and competitively. For the last several years, she usually had a jigsaw puzzle in progress in her den. Mary relished new experiences and over the years learned to decoupage, knit, crochet, cross stitch, needlepoint and crewel embroider. She loved to create and found useful purpose in all she did. Although she was a dedicated sender of greeting cards, she embraced technology so that she could email and text her friends and family. She loved receiving e-messages, especially pictures of her grandchildren and great-grandchildren. Dedicated to both learning and gardening, she became a Master Gardner. She enjoyed her roses but found even more joy in sharing them. When she heard of an upcoming event, she began saving roses to share before anyone asked. She favored daffodils and tulips outside and African violets, holiday cactus, and orchids indoors. She enjoyed feeding the birds in her backyard and sharing their activities with visitors. Early on, Mary chose service to others as her lifelong commitment. In 2000 the Magnolia-Columbia County Chamber of Commerce named her Citizen of the Year and in 2018 honored her with the Lifetime Achievement Award. Mary exemplified the adage that from those to whom much is given, much is expected. She lived the principle of philanthropy: the use of private resources for the public good. Mary delighted in many things, but she was devoted to her family: her three daughters, seven granddaughters, two grandsons, eleven great-grandchildren, and their spouses. In addition to her parents, she was predeceased by her husband, John W. Harsh, her little dog “Bella,” cherished cousins, and many lifelong friends. Mary is survived by her daughters, Molly Burns and husband Bob of Magnolia, Roxana (Roxie) Whitner and husband Flip of Hot Springs Village, and Amy Sixbey and husband Pat of Roland; grandchildren, Robert Burns of Magnolia, Elizabeth Anderson and husband Jamie of Scott, John Douglas Whittemore and wife Ashley of Nacogdoches, TX, Jessica Luther and husband Erik of Round Rock, TX, Rebecca Gosnell and husband Chris of Magnolia, Julia Kirk and husband Matt of Lonoke, Mary Jane Platt of Benton, Mary Elizabeth Sixbey of Fayetteville and Annie Sixbey of Fayetteville; great-grandchildren, Slater and Warnock Anderson, Hayden, Joshua and Mary Elizabeth Luther, Grayson and Hayes Gosnell, and James, Mason and Jasmine Kirk. Mary’s family would like to extend its gratitude to Sherry Cooper, Marchele Warren, and Life Touch Hospice (especially Steve and Ashley). Under the direction of Lewis Funeral Home, Inc., a private graveside service will be held Saturday, May 15. Visitation will be held on Sunday, May 16, from 1:00-2:30 p.m. at Lewis Funeral Home, Inc. in Magnolia. A memorial service will follow at 2:30 p.m. In lieu of flowers, memorials may be made to Magnolia Junior Charity League, PO Box 1091, Magnolia, AR 71754; Columbia County Community Foundation, 116 S Washington, Magnolia, AR 71753; SAU Foundation, PO Box 9174, Magnolia, AR 71754; or CCAPS, PO Box 2003, Magnolia, AR 71753.

Mary Elizabeth Warnock Harsh passed away in her home on May 13, 2021 surrounded by her family and a host of beautiful flowers. Mary was a native and lifetime Magnolian born January 28, 1922 to the late Nina Grayson Warnock and Robert... View Obituary & Service Information

The family of Mary Elizabeth Warnock Harsh created this Life Tributes page to make it easy to share your memories.

Mary Elizabeth Warnock Harsh passed away in her home on May 13,...

Send flowers to the Harsh family.