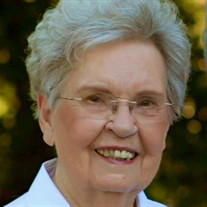 Mary Marie Glasscock Phillips 95 of Magnolia, Arkansas formerly of Stephens, Arkansas passed away on Friday, October 9, 2020 at Wentworth Place in Magnolia. She was born on September 3, 1925 at home in Harmon, Louisiana to the late Henry Benjamin Glasscock, Sr. and Florence Wilkerson Beard Glasscock. Marie is preceded in death by her parents; husband George Lewis Phillips whom she married on May 19, 1950; two brothers, H.B. Glasscock, Jr. and Jack Glasscock; and a sister Jean Grace. Marie is survived by her three children, Terry and Jerry Rutledge of Ardmore, Oklahoma, Alan Phillips of Magnolia, and Jo Lyn and Johnny Shipp of Stephens; grandchildren, Brady and Lori Arrington, Adam and Michelle Arrington, Mark Phillips, Jay and Logan Phillips, and John and Julie Shipp; great grandchildren, Brett and Brianna Arrington, Katie and Abigail Arrington, Zach Shipp, and Chase Arrington and Cole Arrington; and a host of extended family of nieces, nephews, and friends. The family would like to especially thank Lisa Bray for all she has done for Marie and our family. Marie was a stay at home mother until her children grew older. During the Viet Nam engagement, she went to work for Firestone Coated Fabrics in Magnolia and was employed there for thirteen years. She worked with many who remained dear friends through the years, Robert Antoon, Cooksey Cotton, Lyn Elledge, and others. In 1973, George and Marie built Marie’s Grocery, a convenience store on the south end of Stephens. Through the years George and Marie donated tons of ice for many events in Stephens and sent bags of groceries when there was a death in the community. Many times, if someone was having a hard time, they were given credit or Marie would “hold a check” for them until times got better. After retiring from the store George and Marie enjoyed fishing the Ouachita River and Lake Erling. Marie’s hobby was sewing. She bought her first Singer Lightweight sewing machine on credit in her early twenties and paid it out at $5.00 a month. Later as her children grew, she made their clothes and through the years, sewing was her greatest hobby. She learned how to upholster furniture; she made decorative pillows, sock monkeys, casserole covers, and hundreds of fleece blankets and potholders. She gave away far more than she ever kept or sold. Her joy was to give a homemade item to those she befriended. In recent years when she could no longer drive, sewing was her solace. Marie was a member of First Baptist Church in Stephens, and a member of the Eastern Star. Hers was a life well lived and she was blessed to enjoy her 95th birthday recently. Mom’s greatest fear was having to leave home and not be able to live independently. With the help of her children, especially son Alan, she was able to live out her last days in her favorite place, HOME. In the end, she “did it her way.” Godspeed Mom as you fly into the arms of Jesus. You will be missed by all who knew you and remembered each time someone is warmed by one of your handmade blankets. A private family graveside will be held at Stephens Cemetery with Bro. Sandy Carter officiating under the direction of Lewis Funeral Home, Inc. in Magnolia. Memorial donations may be made to CCAPS, PO Box 2003, Magnolia, Arkansas 71754. To sign the online guestbook or share a memory visit www.lewisfuneralhome.biz

Mary Marie Glasscock Phillips 95 of Magnolia, Arkansas formerly of Stephens, Arkansas passed away on Friday, October 9, 2020 at Wentworth Place in Magnolia. She was born on September 3, 1925 at home in Harmon, Louisiana to the late... View Obituary & Service Information

The family of Mary Marie Phillips created this Life Tributes page to make it easy to share your memories.

Send flowers to the Phillips family.