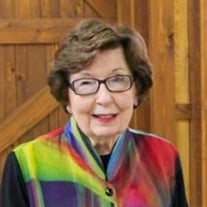 Olga Ouida Ward English, 93, of Hot Springs, AR, passed peacefully into the arms of Jesus on May 3, 2021. She was born July 25, 1927 in Malone, FL, to Robert Edward and Olga Hinson Ward. Olga grew up in Malone, FL, the oldest of four siblings and “second Mama” to brothers William Robert and Foxx Edward and sister Annette of Jasper, TX. Olga was an avid reader, gardener, bridge player, accomplished cook and was known to play a mean game of Uno with her grand- and great-grandchildren. She was a leader and achiever at Malone High School: senior class valedictorian, gifted baritone player in the band, cheerleader and Queen of Carnival. The first in her family to attend college, she was in the Homecoming Court and earned a degree in Business at Florida State University and, upon graduation, taught business classes in Panama City. It was there that she met and captured the lifelong devotion of a newly-minted Air Force lieutenant, Paul J. “Jack” English and began an adventure that took her throughout the U.S. and as far away as Tokyo, Japan. They married at Travis AFB, CA, in August 1950, a union that endured until Jack’s death in November 2015. The life of a military wife adds the uncertainty of frequent relocations to the duties of a homemaker and mother. Olga handled her role with grace and allowed her experiences of having to leave old friends and make new ones in unfamiliar places to turn her into a welcoming and gracious includer of others. One granddaughter-in-law observed, “She welcomed the spouses into her home and heart with love. She made sure to make lasting connections with the newcomers. She knew how to love others and made sure we knew how much she loved us.” Olga’s Air Force adventure ended when Jack retired after his tour in Vietnam and, after a two-year stop in Texas, they moved to Magnolia, AR, in 1971 and joined her father, Robert Ward, in creating Ward-English Timber company. Six months later, Mr. Ward passed away unexpectedly and Olga was an integral partner in helping Jack build and maintain their business. Olga and Jack thrived in Magnolia and it became the home they had gone without during their service years. Many close and lasting friendships were forged, creating bonds that flourished until her last day with farewell visits in her hospital room. Olga was active in community issues, especially supporting the environment, health and education. She enjoyed memberships in PEO Chapter AN, BBBs Bookclub, Wednesday Duplicate Bridge Club, Supper Club Bridge Group, and Clegg/Open Door Sunday School Class. A grandson remembers, “She was a Southern belle and delight to many. She had more friends at 90 than all of us combined.” Olga is survived by her two sons – Robert Jackson “Bob” English (Renee) of Arlington, TX; and Paul Timothy “Tim” English, M.D. (Cindy) of Hot Springs; five grandchildren: Travis English (Elizabeth); Lacey English Franklin (Robert); Lauren English Britton (Beau); and Benjamin English (Alex); sister Annette Ward Smith, six great grandchildren: Tucker, Brooks and Annabel Franklin; Jack and Isabel English; Briggs Britton; and numerous nieces, nephews and friends. Preceding her in death were her parents; her husband of 65 years and the love of her life, Jack English; and brothers Robert and Foxx Ward. A celebration of her life will be held Saturday, May 8, 2021, at First United Methodist Church in Magnolia, AR, with visitation from 1:00-2:00pm and service at 2:00pm. Interment will follow at the Lakeside Cemetery in Stamps, AR, under the direction of Lewis Funeral Home in Magnolia. Honorary pallbearers: Friends of the Clegg/Open Door Sunday School Class, PEO Chapter AN, Wednesday Duplicate Bridge Club and BBB Book Club. Pallbearers: Travis English, Benjamin English, Rob Franklin, Beau Britton, Ronnie Ribble, and Jim Garrett. In lieu of flowers, the family suggests memorials to First United Methodist Church of Magnolia, AR or First United Methodist Church of Hot Springs, AR. To sign the online guestbook or share a memory visit www.lewisfuneralhome.biz

Olga Ouida Ward English, 93, of Hot Springs, AR, passed peacefully into the arms of Jesus on May 3, 2021. She was born July 25, 1927 in Malone, FL, to Robert Edward and Olga Hinson Ward. Olga grew up in Malone, FL, the oldest of four siblings... View Obituary & Service Information

The family of Olga Ouida English created this Life Tributes page to make it easy to share your memories.

Send flowers to the English family.