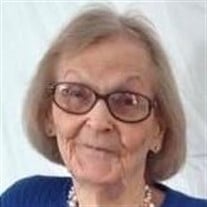 Patsy J. (Burchfield) Adkins, 90, of Magnolia, AR passed away Sunday, October 4, 2020 at her home surrounded by her family. She was born January 20, 1930 in McNeil, AR to the late Herman V. and Essie (Price) Burchfield. She was preceded in death by her husband Melvin Jay Adkins; sons Johnny and Jerry Adkins; and half-brother Jerry Robinson. Patsy is survived by her daughter Jane Roberson (William) of Magnolia; daughter in law Judy Adkins of Pensacola, FL; grandchildren Amanda Mosley-Blackford (Shawn) of Haughton, LA, Rickey Mosley (Dallas) and Lance Mosley (Shannon) of Longview, TX, Amy Cook (Daniel) of Gulf Breeze, FL, Mark Mosley (Mary Ann) of Magnolia, Molly O’Connor of Gulf Breeze, FL, Stoker Adkins (Taryn) of College Station, TX, Hannah Adkins of Indianapolis, IN, Brandy Mosley of Paris, TX, and Crystal Garrett of Bella Chase, LA; great grandchildren Wesley, Kailee, Jacelyn, Bailey, Megan, Malorie, Joshua, Jordyn, James, Patrick, Drillen, McKenna, Chyner, Stoker, Jr., Mary, Hadley, Daniel, Abby, Zander, Koehn, Elsia, Chrislyn, and Chylyn; great-great grandchildren Lillian and Adelynn. Today, we celebrate a life well lived. A life spent treasuring what truly matters most. Patsy Adkins loved Jesus, family, friends, and the beauty that comes with it all. She was a life-long resident of Magnolia, Arkansas. Even while traveling the world in earlier years with her husband, Melvin, she still considered Magnolia home. At the young age of 6, Patsy developed a love for music while taking piano lessons. It was a love that would last the rest of her life and one she generously shared with her church family at Hilltop Baptist where she played until her final few years. Special times were spent at home surrounded by family while she played old gospel hymns, Christmas songs, and on rare occasions she would entertain them with a little Jerry Lee Lewis. Her music will continue to play in the hearts of those who loved her most. She knew the importance of time spent with grandchildren. These treasured times were shared under a beloved pecan tree where together they shelled peas, shucked corn, and washed jars. Memories were built to last in her garden, even the ones that were meant to teach and guide. She knew the importance of not sparing the rod to avoid spoiling the child and her backyard provided the switches she occasionally needed to guide the grandchildren. It was her firm hand and gentle voice that taught generations to appreciate the importance of love and discipline. Her family admires the strength she exhibited in her roles as mother, grandmother, and great grandmother. She is a beacon of light to them all. Jesus Christ was the driving force behind how she raised her family. She spent countless hours studying God’s word and never hesitated to share her testimony with family and friends. Her faith in God was unfailing, even through the loss of her husband and two sons, she never questioned His purpose. Instead, those losses served as the catalyst for her to rely more deeply on the promises of God and in return her faith continued to grow as He led her through the storms of life. She knew the importance of trusting God when all else seemed to fail. He was her rock, her redeemer, and today, she is in Heaven with Jesus. We are celebrating and honoring the life of a simple Christian woman who spent her days living for her Savior, and loving her family, and her friends. Visitation will be held on Tuesday, October 6, 2020 from 12:30 to 1:30 p.m. at Lewis Funeral Home, Inc. in Magnolia, AR with a graveside service to follow at 2:00 p.m. at Memorial Park Cemetery with Bo. Ronald Blagrave officiating. Pallbearers will be Rickey Mosley, Lance Mosley, Stoker Adkins, Mark Mosley, Michael Adkins, and Terry Haught. Honorary pallbearers will be her great grandsons, Tommy Wynn, Rickey Sheppard, and Will Roberson. In lieu of flowers memorial donations may be made to the St. Jude Children’s Research Hospital in Memphis, TN. To sign the online guest book or to share a memory visit www.lewisfuneralhome.biz

Patsy J. (Burchfield) Adkins, 90, of Magnolia, AR passed away Sunday, October 4, 2020 at her home surrounded by her family. She was born January 20, 1930 in McNeil, AR to the late Herman V. and Essie (Price) Burchfield. She was preceded... View Obituary & Service Information

The family of Patsy J. Burchfield Adkins created this Life Tributes page to make it easy to share your memories.

Send flowers to the Adkins family.