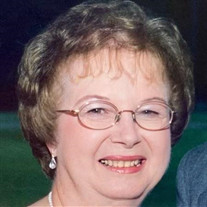 Peggy Ann Williams Maloch of Emerson passed away June 16, 2021 at her home. She was born August 13, 1937 to Dewey Nelson Williams and Annie Mae Bigelow Williams in the Walkerville community. Peggy attended Walkerville school and subsequently Emerson School where she graduated in 1954. She married Elwin P Maloch on June 18, 1954 to whom she was married until his death in 2016. They had three children, Roger, Bruce and Cindy. Married at 16 years of age, Peggy became adept at all the usual housewife skills of cooking, sewing and canning food for her family. With only 11 years of school, she became a self-taught bookkeeper/accountant and worked for the Emerson School district as secretary and bookkeeper for 30 years. She also served as secretary/treasurer of the Walkerville Community Fire District, treasurer of the Hephzibah Baptist Church and Cemetery Association and secretary/treasurer of the Walkerville Water System. She was a lifelong member of Hephzibah Missionary Baptist church where she was active in “Ladies Auxillary” and bible studies throughout her life. She kept a beautiful home that she shared with many in the community and in so doing, taught her children and grandchildren the art of hospitality and generosity. She was “Nana” to all of her grandchildren who she always welcomed into her home, and if there is a crown in heaven for Chicken and Dumplings, “Nana” will certainly get it. Peggy was preceded in death by her husband Elwin, her sister Idelle Simms, her brothers Sherwin and Dewey and her son-in-law Steve Pals. She is survived by her children Roger Maloch and wife, Libby, Bruce Maloch and wife, Martha and Cindy Maloch Pals. She is survived by her grandchildren Ryan Maloch and wife, Amy, Lauren Maloch Mitchell and husband, Chris, Victoria Maloch, Benjamin Maloch and wife Christie, Rachel Maloch Abukhdeir and husband Hesham, Jacqueline Maloch, Davis Maloch, Samara Pals Cramer and husband Andy, Brande Pals, Zachary Pals ad Schuyler Pals and wife Grace. She was blessed with great-grandchildren Reese Mitchell, Landry Mitchell, Kinsleigh Maloch, Ellie Maloch, Abigail Maloch, Marley Kate Maloch, Lydia Maloch, Natalie Maloch and Noah Abukhdeir. A visitation will be held on Saturday, June 19, 2021 at 10:00 a.m. at the Hephzibah Baptist Church, Emerson, AR with a graveside to follow at the Hephzibah Cemetery at 11:00 a.m. with Mike Wolf officiating under the direction of Lewis Funeral Home, Inc. in Magnolia. Memorial donations may be made to Hephzibah Cemetery, c/o Rodney Maloch, 4110 Columbia Rd 5, Magnolia, AR 71753. The Maloch Family would like to express their gratitude to Tywana Beasley and the other caregivers who cared for Mrs. Maloch at the end of her life with skill, graciousness and love. To sign the online guest book or to share a memory visit www.lewisfuneralhome.biz

The family of Peggy Ann Williams Maloch created this Life Tributes page to make it easy to share your memories.

Send flowers to the Maloch family.