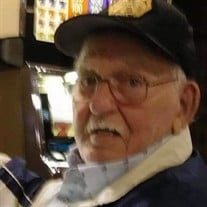 Phebe Robert Bedwell, 79 of Magnolia, Arkansas passed away on Thursday, January 2, 2020 at the John R. Williamson Hospice House in El Dorado, Arkansas. He was born on March 23, 1940 in Thiebes, Illinois to the late Phebe and Lucy Elzora Bedwell. Phebe previously worked for McDonald Dougles where he built the re-entry nose cone for the spaceship for astronaut John Glenn. He retired from Albemarle where he was a supervisor. Phebe graduated from Southeast Missouri State University and went on to become a semi pro baseball player and was a die hard Cubs fan. Horseracing was a passion of his but always said his greatest accomplishment was his family. He spent his retirement with his wife, children, and grandchildren. He was kind to everyone he met and will be missed by so many. He is preceded in death by his parents; a son Robert Lee Bedwell, and a brother, Wilbur Bedwell. Phebe is survived by his wife, Vivian Lee (Caldwell) Bedwell whom he married on January 16th 61 years ago; two daughters, Shelia and Steve Atkinson, Sherrie and Christy Bedwell all of Magnolia; four grandchildren, Tracy and Ashley Atkinson of Magnolia; Stevie and Quinton Atkinson of Bossier City, Trent and Haleigh Bedwell of Parkers Chapel, Blake and Lauren Bedwell of Magnolia; great grandchildren, Phoebe, McKenzie, Chandler, Presley, Hadley, Easton, Landon, Trenleigh, Ryder, Aria, Braylee, and Gunner; two sisters, Jessie and Dennis Turner of Olive Branch, Illinois, Lovye Young Goforth of Evansville, Indiana; sister in law Sandy Bedwell of Cape Girardeau, Missouri; niece Kim Bedwell of Williamsburg, Virginia; and dear family friend, Louise Arnold and family. The family would like to thank Magnolia Regional Hospital, Dr. Fred Murphy, and Life Touch Hospice to the care given to our family. Cremation service were provided by Lewis Funeral Home, Inc. in Magnolia, Arkansas. To sign the online guestbook or share a memory visit www.lewisfuneralhome.biz

Phebe Robert Bedwell, 79 of Magnolia, Arkansas passed away on Thursday, January 2, 2020 at the John R. Williamson Hospice House in El Dorado, Arkansas. He was born on March 23, 1940 in Thiebes, Illinois to the late Phebe and Lucy Elzora... View Obituary & Service Information

The family of Phebe Robert Bedwell created this Life Tributes page to make it easy to share your memories.

Phebe Robert Bedwell, 79 of Magnolia, Arkansas passed away on...

Send flowers to the Bedwell family.