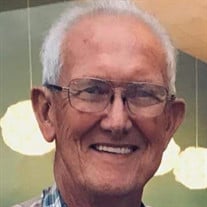 On Sunday, January 23, 2022, Robbie Neil Rogers exemplified the true meaning of dignity as he entered heaven after a courageous five-day battle with a sudden illness and Covid complications, just a month before his 85th birthday. He continued to teach his children life lessons right up to his last breaths, as he had done every day of their lives. Robbie was born on February 24, 1937, in Waldo, Arkansas, to the late Delbert and Thera Christine Winberry Rogers. He served in the U.S. Army and would then enter an almost life-long career in the oil and gas industry. Robbie would work for numerous companies throughout the years, own and operate East Texas Pipe Handlers in Longview for several years. Robbie would then begin a career at Kilgore College in 1992 and retire on March 31, 2015, at the East Texas Oil Museum on the college campus. His love of hunting and the outdoors would lead to starting R&R Collars from his home as a hobby in 1989. This hobby would lead to working fulltime while at the college and what also seemed to be another full-time job as he would travel to various events to sell his handmade dog collars. Business then continued to grow and include everything a hog hunter would need to protect their dogs while hunting wild hogs. For nearly 30 years he was a fixture at his usual sales lot at Canton First Monday Trades Days. Robbie was preceded in death by his brothers, James, Tommy, and Aaron “Lefty” Rogers; sister-in-law, Dorothy Rogers; and granddaughter, Sirena Renee Warner. Survivors include his daughter Robin Williams and husband David; Jeffrey Neil Rogers and wife Ashley; Brent Rogers, his grandson that was raised and claimed as his son; Sue Pepper, the mother of his children; six grandchildren; four great-grandchildren; sisters-in-law, Dorothy Rogers, Debbie Rogers, Frances Nelson; and several nieces and nephews. Funeral services will be held in the chapel of Jackson’s Burks-Walker-Tippit Funeral Directors, 215 E. Front St., Tyler, at 10:30 a.m. Saturday, January 29, 2022. Graveside services will be held at 2:00 p.m. at Oaklawn Memorial Park in Center, TX. Honorary pallbearers will be Leon Dodgen, Sarah Lugenbeal, Joe White, and other friends and co-workers from Kilgore College. The Rogers family will receive friends from 5:30-7:30 p.m. Friday, January 28, 2022, at the funeral home. As Robin and Jeffrey told him when they both were able to be with him the day before his death: “It’s not goodbye dad, it’s we’ll see you later!”

On Sunday, January 23, 2022, Robbie Neil Rogers exemplified the true meaning of dignity as he entered heaven after a courageous five-day battle with a sudden illness and Covid complications, just a month before his 85th birthday. He continued... View Obituary & Service Information

The family of Robbie Neil Rogers created this Life Tributes page to make it easy to share your memories.

Send flowers to the Rogers family.