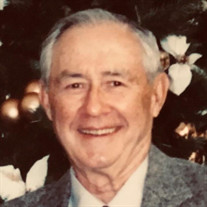 Robert Arlen Scott was born on June 28th, 1932 in Taylor, Arkansas and died January 15th, 2021 at the age of 88, in Bella Vista, Arkansas. Bob graduated from Magnolia, Arkansas High School in 1950 where he played football for the Panthers. During high school he started working in the oilfields in the summers for McAlester Fuel Company. He attended Magnolia A&M College and then married Mary Narcissus McDaniel. After marrying Mary, their eldest son, Ross Arlen, was born in New Mexico, followed by Mary Shannon in Magnolia, Arkansas. Following his career path to Billings, Montana, Mary gave birth to their youngest children, Melissa and then Robert. Because of Bob and Mary’s love of animals, the children were fortunate to have horses and always a dog. He taught his children his strong work ethic and the importance of honesty. Bob had a long and successful career in the oil industry spanning 35 years. He supervised drilling operations in Alaska, Canada and the Rocky Mountain Region for Champlin Petroleum and Union Pacific Resources (UPRC). He was the Regional Drilling Manager at UPRC in Denver, Colorado when he retired in 1988. He and Mary moved home to Arkansas from Parker, Colorado in 1993, where he pursued his passion for golf. Bob participated in several men’s golf leagues in Bella Vista. Over his golfing years he made a hole in one four times! He was preceded in death by his parents Chester Overton Scott, Helen (Norman) Scott and daughter-in law Tammy (Striegel) Scott. He is survived by his wife Mary and children Ross Scott Shreveport, Louisiana, Shannon Siebert (Lowell) Henderson, Nebraska, Melissa Albert (Darryl) Golden, Colorado, Robert Scott Grand Junction, Colorado and grandchildren Andy Scott (Michelle), Eric Scott, and Taylor Siebert (Jessica), Tessa Siebert, Nikki Scott, as well as ten great grandchildren. He will be remembered how he loved his family in his own strong way. A visitation will be held on Monday, January 25, 2021 at 1:30 p.m. at the Sharman Cemetery with a graveside to follow at 2:00 p.m. with Bro. Chris Lucy officiating under the direction of Lewis Funeral Home, Inc. in Magnolia. Because of Bob’s love for animals, he and Mary volunteered for Horses for Healing, a therapeutic program for disabled children. He was also a loyal supporter of Bella Vista Animal Shelter. To sign the online guest book or to share a memory visit www.lewisfuneralhome.biz

Robert Arlen Scott was born on June 28th, 1932 in Taylor, Arkansas and died January 15th, 2021 at the age of 88, in Bella Vista, Arkansas. Bob graduated from Magnolia, Arkansas High School in 1950 where he played football for the... View Obituary & Service Information

The family of Robert Arlen Scott created this Life Tributes page to make it easy to share your memories.

Send flowers to the Scott family.